Explaining the Perverse Impact of Double Taxation With a Chart

Whether I’m criticizing Warren Buffett’s innumeracy or explaining how to identify illegitimate loopholes, I frequently write about the perverse impact of double taxation.


By this, I mean the tendency of politicians to impose multiple layers of taxation on income that is saved and invested. Examples of this self‐​destructive practice include the death tax, the capital gains tax, and the second layer of tax of dividends.


Double taxation is particularly foolish since every economic theory—including socialism and Marxism—agrees that capital formation is necessary for long‐​run growth and higher living standards.


Yet even though this is a critically important issue, I’ve never been satisfied with the way I explain the topic. But perhaps this flowchart makes everything easier to understand. 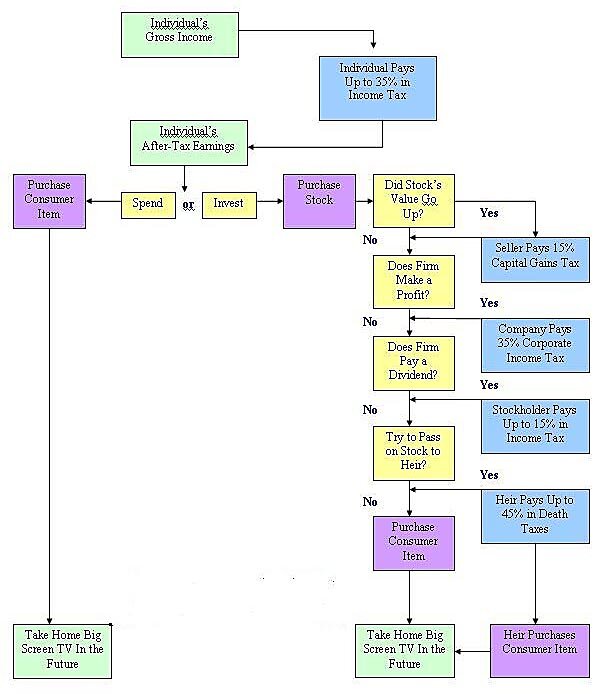 There are a lot of boxes, so it’s not a simple flowchart, but the underlying message hopefully is very clear.

You don’t have to be a wild‐​eyed supply‐​side economist to conclude that this heavy bias against saving and investment is not a good idea for America’s long‐​run prosperity.


Also, you cannot accumulate enough savings and investment to be subject to the death tax, though that’s not exactly aiming high.


But these strategies—and others—are not economically optimal. There should not be a tax bias against capital formation.


Too bad we can’t be more like Hong Kong, which has eliminated all extra layers of taxation.


That’s the benefit of real tax reform such as a flat tax. You get a low tax rate and you get rid of corrupt loopholes, but you also get rid of double taxation so that the IRS only gets one bite at the apple.