Evidence of the Risks of Elevated Unemployment Insurance Benefits

Last week’s job market numbers were strong. The unemployment rate fell to 6.0 percent – the lowest since the start of the COVID-19 pandemic – and total nonfarm payroll employment rose by 916,000 in March. But signs already suggest that the employment bounce-back is being restrained from its full potential by Congress’s decision to entrench a $300 weekly unemployment benefit supplement through September.

Combined with state unemployment benefits, around 37 percent of workers can currently make more unemployed than in work. A low-income worker in Massachusetts previously earning $535 per week faced a pre-pandemic replacement rate of unemployment insurance benefits to earnings of 48 percent ($257). Now, the same worker would obtain benefits worth 104 percent of their pre-recession earnings ($557).

In New Mexico, someone previously earning $342 per week would see a replacement rate of 141 percent from the expanded benefits ($483). The disincentive to work this creates reduces the labor supply, raising market wages but by squeezing employment levels as fewer workers make themselves available for job opportunities that are economic to offer for businesses.

Using evidence from last year when supplementary benefits were a massive $600 per week, many argue there is little to no work disincentive. True, plenty of workers will think longer-term and re-enter the labor market if they think a job now provides more security after the pandemic. But last year conditions were very different. After the outbreak of the crisis, few firms were hiring, meaning that a fall in applications from those earning more out-of-work didn’t much change overall employment numbers. At that time, most returnees to work were also recalls to their old employers, who risked losing benefits if they refused.

Now, matters are very different. The prospects for a meaningful reopening are real and imminent, with a potentially large flood of demand in previously shuttered sectors. Longer-term, permanent unemployment is much more of a problem, with recalls much less of an issue. And far from uncertainty about benefit continuation, a Democratic Congress and Presidency probably reassures those unemployed that the checks will keep coming. Even though we should still expect a robust employment recovery—ending the pandemic will be the biggest “stimulus” of all—there are therefore reasons to expect high UI benefits are holding back the jobs recovery.

A few recent pieces of data heighten these concerns. 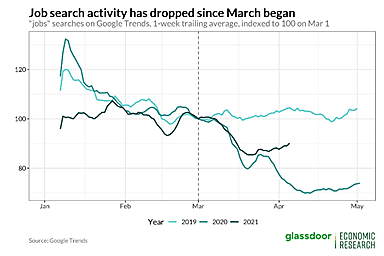 Upon reading these statistics, commentators commonly retort to businesses: “you need to raise wages!” But businesses already are, as a consequence of the labor supply effect of benefits and the need to compensate workers for the risks of contracting COVID-19! According to NFIB Chief Economist Bill Dunkelberg, “Small business owners are raising compensation to attract the right employees. It is important that lawmakers focus on policies that will help strengthen job growth and not deter the small business recovery.”

The simple truth is that many low-wage businesses have been pole-axed by COVID-19 for months, with enforced closures, lower demand, and the need to invest in social distancing protocols making them less efficient. Companies won’t bother looking to hire workers in situations where their employment isn’t profitable for the business. Extending UI benefits right through this recovery will mean fewer jobs. But policymakers appear to believe that higher-than-necessary unemployment is worth it.

For more on unemployment benefits during the pandemic, you can order Ryan Bourne’s recently released book Economics In One Virus from the Cato store or your country’s relevant Amazon store.