Evidence from England Shows that If You Want to ‘Soak the Rich,’ Keep Tax Rates Low

I’ve pulled evidence from IRS publications to show that rich people paid a lot more to Uncle Sam after Reagan reduced the top tax rate from 70 percent to 28 percent. 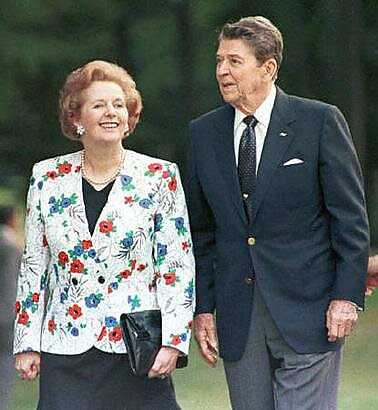 The good ol’ days[/caption]But the Gipper wasn’t the only one to unleash the Laffer Curve. The United Kingdom saw similar dramatic results when Margaret Thatcher lowered the top tax rate from 83 percent to 40 percent. Allister Heath explains.

During the 1970s, when the tax system specialised in inflicting pain, the top one per cent of earners contributed 11pc of income tax. By 1986–87, with the top rate down to 60pc, that had increased to 14pc. After the top rate fell to 40pc in 1988, the top 1pc’s share jumped, reaching 21.3pc by 1999–2000, 24.4pc in 2007-08 and 26.5pc in 2009-10. Lower taxes fuelled a hard‐​work culture and an entrepreneurial revolution. Combined with globalisation and the much greater rewards available for skilled workers, Britain’s most successful individuals earned a lot and paid a lot in tax.

In other words, Margaret Thatcher’s supply‐​side tax rate reductions paid big dividends, both for the economy and for the Treasury.


Unfortunately, just as American politicians have forgotten (or decided to ignore) the lessons of the Reagan era, British politicians also have gravitated to a class‐​warfare approach. Allister points out that this is having a negative impact.

Yet times are changing, and not just because of the recession. HMRC recently slashed its forecasts for revenues from the top 1pc. It now believes the number of people expected to report £500,000 or more in earnings will fall by a tenth this year; those on £2m are set to drop by a third.

Capital gains tax is too high. Luxury homes transactions are falling because of higher stamp duty. Britain is now a high tax economy; this is distorting work and investment decisions, gradually shifting talent and capital overseas. The overwhelming majority of high earners are already contributing disproportionately to the exchequer; tightening the screws further will be disastrously counter‐​productive. The lesson of the past 30 years is clear: the best way to entice the rich to pay even more tax is to keep rates low and allow them to get even richer.

I have to admit that I don’t want anyone to pay more tax, but I’m even less happy about punitively high tax rates. So I’m reluctantly willing to let the clowns in government have more money in exchange for a tax system that is more conducive to economic growth.


Here’s my Laffer Curve video, which explains more about the relationship of tax rates, taxable income, and tax revenue.

The ultimate goal, of course, is to shrink the central government so that the legitimate functions of the state can be financed at very low tax rates. Heck, if the United States and the United Kingdom had the kind of limited governments that existed 100 years ago, neither nation would even need a flat tax. A few user fees and excise taxes would suffice. Now that’s hope and change.