Sigh. Even when they’re sort of doing the right thing, Republicans are incapable of using the right argument.


Rep. Paul Ryan (R-WI), chairman of the House Budget Committee, has unveiled his proposed budget and he and other Republicans are bragging that the plan will balance the budget in 10 years.

That’s all fine and well, but good fiscal policy is achieved by reducing the burden of government spending, and that means restraining the budget so that federal outlays grow slower than the private sector.


It’s good to balance the budget, of course, but that should be a secondary goal.


Now for the good news. The Ryan Budget does satisfy the Golden Rule of fiscal policy. As you can see in the chart, federal spending grows by an average of 3.4 percent annually, and that modest bit of fiscal discipline is enough to reduce the burden of government spending to 19.1 percent of economic output by 2023. 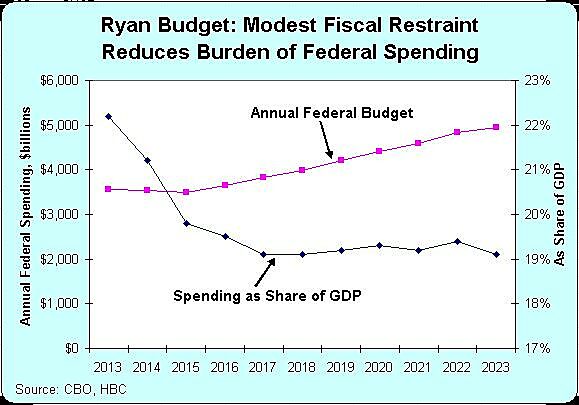 
And there’s also some good tax policy. Not bold tax reform like a flat tax, but top tax rates would be reduced to 25 percent and many forms of double taxation, like the death tax and capital gains tax, presumably would be reduced or eliminated.


Let’s be clear, though, that this is not a libertarian budget. Federal spending will still be far too high. Indeed, the budget will consume a larger share of the economy than it did when Bill Clinton left office.


And while Republicans do a good job of restraining spending in the first couple of years of the new Ryan Budget, outlays rise far too rapidly beginning around 2016.


Equally worrisome, the budget assumes that the federal tax burden should remain at about 19 percent of GDP, higher than the long‐​run average of 18 percent of GDP and—for all intents and purposes—permanently enshrining Obama’s fiscal cliff victory.


And it’s depressing to see that the Ryan Budget has gotten weaker each year.

At this rate, it won’t be that long before the GOP budget and Obama budget converge.


Okay, that’s an exaggeration. But the moral of the story is that the Ryan Budget is a step in the right direction, but much more will be needed to restore limited, constitutional government.