Even Keynesian Accounting Can’t Find All That ‘Stimulus’

From January 2009 to the present, President Obama and his team have repeatedly made grandiose claims about the economic benefits of shoveling money at shovel‐​ready projects or green jobs. “It is largely thanks to the Recovery Act that a second Depression is no longer a possibility,” said the President. He also claimed that lavish spending alone (not Federal Reserve actions or bank bailouts) is what prevented the unemployment rate from “getting up to … 15%.”


If any of that were remotely close to being true then, as a matter of simple accounting, rising federal spending would have shown up as a huge offset to falling GDP in 2009, and also as a major component of the modest increase in GDP growth in early 2010. On the contrary, the table below shows that the increase in federal nondefense spending contributed only two‐​tenths of one percent (0.2) to the change in GDP in 2009. That was no better than 2008 when the Recovery Act did not exist. If nondefense spending had not increased at all in 2009 (unlike 2008) then GDP would have fallen 2.8% rather than 2.6% — scarcely the difference between a recession and a “second Depression.” If nondefense federal spending had not increased at all in 2010, the economy still would have grown at a 3.6% pace in the first quarter, 2.1% in the second. Cutbacks in state and local spending were a trivial damper on GDP growth last year, contrary to recent speculation, and real state and local spending rose significantly in this year’s second quarter (unlike the first).


This is just an exercise in crude Keynesian accounting, not economics. Yet it nonetheless makes the stimulus bill look like a huge waste of money. The reason Keynesian accounting is no substitute for economics is that governments can only spend other peoples’ money. To claim that such spending is a net addition to “aggregate demand” is to ignore those other people — namely, current and future taxpayers.

If the government builds a bridge … by taking tax money away from somebody else, and using that to pay the bridge builder — the guys who work on the bridge — then it’s just a wash. It has no first‐​starter effect. There’s no reason to expect any stimulation. And, in some sense, there’s nothing to apply a multiplier to. You apply a multiplier to the bridge builders, then you’ve got to apply the same multiplier with a minus sign to the people you taxed to build the bridge. And then taxing them later isn’t going to help, we know that. 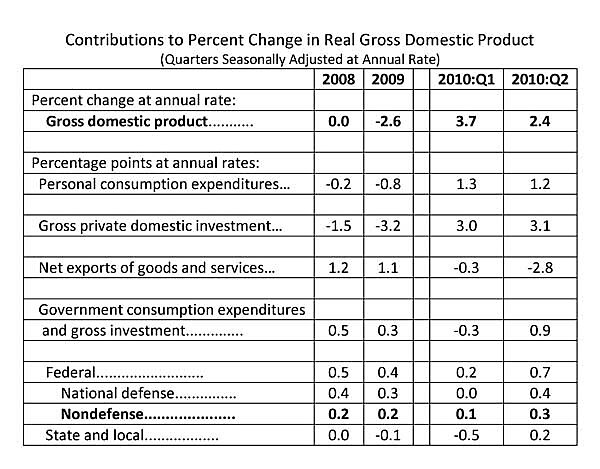