I have great fondness for Estonia, in part because it was the first post-communist nation to adopt the flat tax, but also because of the country's remarkable scenery.

Most recently, though, I've been bragging about Estonia (along with Latvia and Lithuania, the other two Baltic nations) for implementing genuine spending cuts. I've argued that Estonia is showing how a government can reignite growth by reducing the burden of government.

Not surprisingly, some people disagree with my analysis. Paul Krugman of the New York Times criticized Estonia yesterday, writing that the Baltic nation suffered a "Depression-level slump" in 2008 and has only managed an "incomplete recovery" over the past few years.

He blames this supposedly weak performance on "austerity."

This is a sign of progress. In the past, he launched a silly attack on the U.K. for a "government pullback" that never happened, so what he wrote about Estonia at least is based on real events.

My negative reaction is that Krugman is very guilty of cherry-picking data. If you look at the chart that accompanies his post, Estonia's economic performance isn't very impressive, but that's because he's only showing us the data from 2007-present.

The numbers are accurate, but they're designed to mislead rather than inform (sort of as if I did a chart showing 2009-present).

But before exposing that bit of trickery, there's another mistake worth noting. Krugman presumably wants us to think that the downturn coincided with spending cuts. But his own chart shows that the economy hit the skids in 2008 - a year in which  government spending in Estonia soared by nearly 18 percent according to EU fiscal data!

It wasn't until 2009 that Estonian lawmakers began to reduce the burden of spending. So I guess Professor Krugman wants us to believe that the economy tanked in 2008 because of expectations of 2009 austerity. Or something like that.

Returning now to my complaint about cherry picking data, Krugman makes Estonia seem stagnant by looking only at data starting in 2007. But as you can see from this second chart, Estonia's long-run economic performance is quite exemplary. It has doubled its economic output in just 15 years according to the International Monetary Fund. Over that entire period - including the recent downturn, it has enjoyed one of the fastest growth rates in Europe. 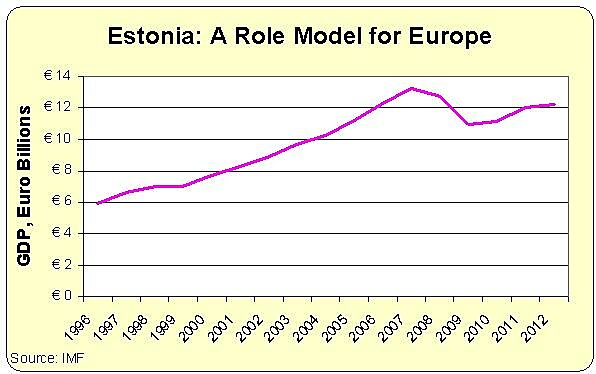 This doesn't mean Estonia is perfect. It did experience a credit/real estate bubble, and there was a deep recession when the bubble burst. And the politicians let government spending explode during the bubble years, almost doubling the budget between 2004 and 2008.

But Estonia reacted to the overspending and the downturn in a very responsible fashion. Instead of using the weak economy as an excuse to further expand the burden of government spending in hopes that Keynesian economics would magically work (after failing for Hoover and Roosevelt in the 1930s, Japan in the 1990s, Bush in 2008, and Obama in 2009), the Estonians realized that they needed to cut spending.

And now that spending has been curtailed, it's worth noting that growth has resumed.

What makes Krugman's rant especially amusing is that he wrote it just as the rest of the world is beginning to notice that Estonia is a role model. Here's some of what CNBC just posted.

Sixteen months after it joined the struggling currency bloc, Estonia is booming. The economy grew 7.6 percent last year, five times the euro-zone average. Estonia is the only euro-zone country with a budget surplus. National debt is just 6 percent of GDP, compared to 81 percent in virtuous Germany, or 165 percent in Greece. Shoppers throng Nordic design shops and cool new restaurants in Tallinn, the medieval capital, and cutting-edge tech firms complain they can’t find people to fill their job vacancies. It all seems a long way from the gloom elsewhere in Europe. Estonia’s achievement is all the more remarkable when you consider that it was one of the countries hardest hit by the global financial crisis. ...How did they bounce back? “I can answer in one word: austerity. Austerity, austerity, austerity,” says Peeter Koppel, investment strategist at the SEB Bank. ...that’s not exactly the message that Europeans further south want to hear. ...Estonia has also paid close attention to the fundamentals of establishing a favorable business environment: reducing and simplifying taxes, and making it easy and cheap to build companies.

Good policy makes a difference. But it also helps to have rational citizens (unlike France, where people vote for economic illiterates and protest against reality).

While spending cuts have triggered strikes, social unrest and the toppling of governments in countries from Ireland to Greece, Estonians have endured some of the harshest austerity measures with barely a murmur. They even re-elected the politicians that imposed them. “It was very difficult, but we managed it,” explains Economy Minister Juhan Parts. “Everybody had to give a little bit. Salaries paid out of the budget were all cut, but we cut ministers’ salaries by 20 percent and the average civil servants’ by 10 percent,” Parts told GlobalPost. ...As well as slashing public sector wages, the government responded to the 2008 crisis by raising the pension age, making it harder to claim health benefits and reducing job protection — all measures that have been met with anger when proposed in Western Europe.

It's worth noting, by the way, that government is still far too big in Estonia. The public sector consumes about 39 percent of economic output, almost double the burden of government spending in Hong Kong and Singapore.

But, unlike certain American politicians, at least the Estonians understand the problem and are taking steps to move in the right direction. I hope they continue.

P.S. The President of Estonia, a Social Democrat named Toomas Hendrik Ilves, used his twitter account to kick the you-know-what out of Krugman yesterday. For amusement value, check out this HuffingtonPost article.

P.P.S. A few other nations, such as Canada and New Zealand, also imposed genuine spending restraint in recent decades and they also got good results.