England Is the New France

The chart below shows everything you need to know about why the United Kingdom is a fiscal disaster. Over the past 10 years, the burden of government spending has skyrocketed from 36.6 percent of GDP to more than 53 percent of GDP. Taxes, meanwhile, have remained largely unchanged, averaging about 40 percent of GDP.

Since the OECD numbers show that the fiscal crisis in the U.K. is solely the result of a bloated public sector, the obvious solution is ... you guessed it, higher taxes.

David Cameron's new coalition government has announced support for a higher capital gains tax and is signalling that this will be followed by an increase in the value-added tax.

There are some proposals to curtail the growth of spending, including some pay cuts for Prime Minster Cameron and other political figures, but I will be very surprised if those amount to more than window dressing. The United Kingdom, I fear, has gone past the point of no return in the journey toward becoming indistinguishable from the decrepit welfare states so common in the rest of Europe. 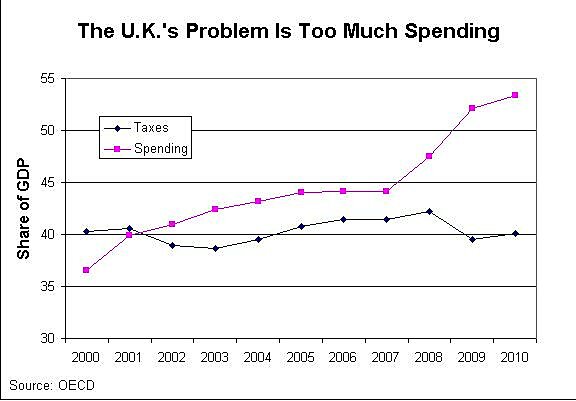