President Trump is reportedly considering pulling the plug on the Deferred Action for Childhood Arrivals (DACA) program, which allows about 800,000 immigrants who came to the U.S. as children to live and work here lawfully. If the president does decide to end the program, it will impose a massive cost on employers who currently employ these workers. The cost of recruiting and hiring new employees is expensive. Here are the facts:

DACA recipients receive employment authorization documents (EADs). It is not illegal to work without authorization, but it is illegal for employers to hire someone who lacks authorization. Thus, DACA EADs essentially grant permission to employers to hire DACA beneficiaries for a given period—in this case, two years—without fear of employer sanctions for hiring an unauthorized worker. Note that the law prohibits employers from discriminating against foreign-born applicants purely because they have temporary authorization. Thus, if President Trump rescinds DACA, employers are the ones who will have to actually implement the policy by policing their workforce and firing DACA recipients. DACA repeal’s regulatory compliance burden will fall directly on American employers.

To estimate these costs, I reviewed 11 studies of the cost of turnover to employers. These studies included a wide variety of occupations with radically different wage levels. The most important component of turnover cost is the leaving employee’s wage, which is the marginal value of the worker’s production. The Table below displays the cost as a percent of annual wages.

An August 2017 Center for American Progress survey of DACA recipients found that their wages had risen to $17.46 hourly (or $34,920 annually). It also found that 91 percent of DACA recipients have jobs. According to my projections based on U.S. Citizenship and Immigration Services data, 790,148 people have DACA or will have DACA by September 1, 2017. Thus, 719,035 immigrants are earning $25.1 billion per year. If the federal government forces employers to fire all of DACA recipients, it will cost employers $6.3 billion.

The fact that some employers will receive advanced notice of the expiration of their employees’ work authorization could mitigate these costs, but according to these studies, the primary cost associated with turnover is the lower productivity of new hires. Additionally, because DACA recipients’ wages have grown 69 percent over the last five years, it is likely that those DACA participants whose cancellations occur in 2018 and 2019 will have higher wages than those today. Finally, DACA participants’ employment rate has also risen year after year—four percentage points since 2016—and older participants have a higher employment rate. This again indicates that the number of firings could be higher than this projection estimates.

The costs will likely not be imposed all at once as the program will slowly unwind over a two-year period. I previously estimated the quarterly rate of expirations, based on U.S. Citizenship and Immigration Services data, which can give us an estimate of how a DACA cancellation would distribute the costs over time. Every week U.S. employers will have to terminate 6,914 DACA employees at a weekly cost of $61 million. 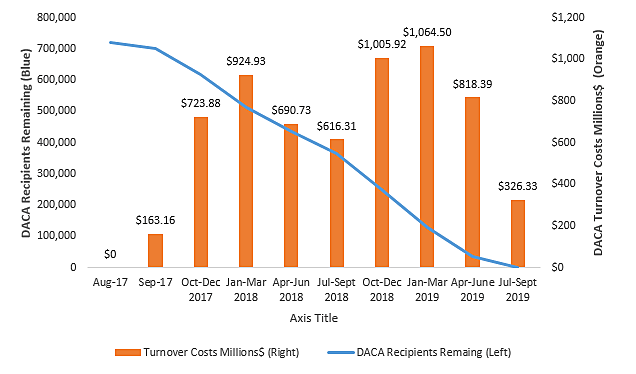 Source: See Table 1 and Cato Institute (Note that 886,000 people have received DACA at some point, but many have had their renewals rejected or have failed to renew for other reasons. 720,000 had jobs in 2017)

For context, the Congressional Review Act regards any new administrative rule as a “major rule” if it will have a likely annual impact of more than $100 million. CRS requires major rules to go through a 60-day notice and public comment period and to allow Congress the opportunity to review it and reject it. Because DACA was not created through a rule-making process, it likely does not require this process to be terminated, but its rescission would still impose $3.2 billion in annual costs. Thus, ending DACA would be the equivalent of more than 30 major regulations.

President Trump is considering DACA rescission only under the threat of a lawsuit that claims DACA was unconstitutionally implemented. If that claim is valid, Congress should immediately act to pass legislation to extend employment authorization and legal status for these young immigrant workers. It should not choose to impose massive costs on employers and immigrants.