A recent paper by Veronique de Rugy examines how policymakers use various budgeting gimmicks to increase spending and obscure liabilities. One particularly abusive mechanism is the designation of supplemental spending as an “emergency.” The emergency designation makes it easier for policymakers to skirt budgetary rules, particularly “pay‐​as‐​you‐​go” (PAYGO) requirements.


The following chart from the paper shows how supplemental spending, most of which was designated as “emergency,” has taken off in the last decade: 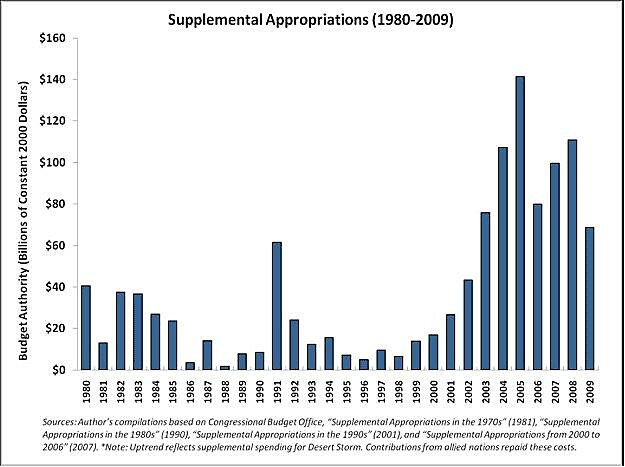 As the chart notes, much of the increase is attributable to supplemental appropriations for the wars in Iraq and Afghanistan. The Bush administration was rightly criticized by analysts across the ideological spectrum for funding the wars outside of the standard budget process.


However, with the Democrats in control, the emergency designation is now being abusively applied to domestic spending. Congressional Research Service data obtained by the office of Senator Tom Coburn (R‐​Okla.) finds that emergency spending has increased deficits by almost $1 trillion since the 111th Congress was seated in January 2009.


The biggest chunk came with passage of the $862 billion “emergency” stimulus bill in February 2009. The Obama administration insisted that the emergency spending legislation was necessary to jump‐​start the economy and keep unemployment below 8 percent. Oops.


Congress has since passed additional multi‐​billion dollar “emergency” bills to extend supposedly simulative activities like unemployment benefits. The latest “emergency” extender bill that is bogged down in the Senate would add another $57 billion in debt.


What is Congress allowed to designate as emergency spending? Keith Hennessey, a former economic advisor to George W. Bush, offers the best definition: “it’s whatever you can get away with labeling as an emergency.”


However, Hennessey points out that there was originally a test with a fairly high bar created by the Office of Management and Budget in 1991 under the first President Bush. According to Hennessey, all five of these conditions had to be met:

Hennessey says the definition was included in congressional budget resolutions during Bush II’s administration and that the president proposed codifying it in law. But that doesn’t seem to be the policy that the Bush II administration actually followed. With perhaps the exception of initial hostilities, there was nothing “unforeseen” about Bush’s “emergency” war spending in Iraq and Afghanistan. It seems that Bush’s inability to abide by his own proposal is another sad reminder that his fiscally reckless tenure helped pave the road to Obama.