Kentucky Senator Rand Paul has weighed in concerning the rumors that Elliott Abrams could become the Number 2 person at the State Department. “Crack the door to admit Elliott Abrams,” Paul writes, “and the neocons will scurry in by the hundreds.”

Neoconservative interventionists have had us at perpetual war for 25 years. While President Trump has repeatedly stated his belief that the Iraq War was a mistake, the neocons (all of them Never-Trumpers) continue to maintain that the Iraq and Libyan Wars were brilliant ideas. These are the same people who think we must blow up half the Middle East, then rebuild it and police it for decades.

I voted for Rex Tillerson for secretary of state because I believe him to have a balanced approach to foreign policy. My hope is that he will put forward a realist approach. I don’t see Abrams as part of any type of foreign policy realism.

In a country of 300 million people, surely there are reasonable foreign policy experts who have not been convicted of deceiving Congress and actually share the president’s foreign policy views. I hope Secretary Rex Tillerson will continue the search for expert assistance from experienced, non-convicted diplomats who understand the mistakes of the past and the challenges ahead.

During an appearance on the Tucker Carlson Show on FoxNews last night (clip starts at 5:23), the Republican was asked about his concerns. 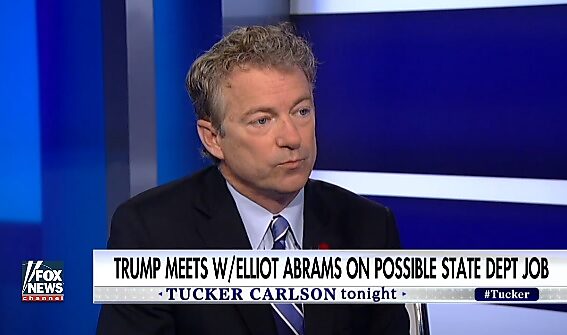 “Someone who was a Never-Trumper should never be in a Trump State Department,” Sen. Paul said, noting that “Elliott Abrams was one of the key architects of the Iraq war. We don’t need people with a failed policy back in.”

Host Carlson admitted to being “baffled by it.”

Elliott Abrams was one of the leading supporters of the Iraq War. He signed the original statement of principles for the Project for a New American Century, the organization founded by leading #NeverTrumpers William Kristol and Robert Kagan that was instrumental in making the case for regime change in Iraq. Abrams has since signed a number of other letters organized by PNAC and its successor organization, the Foreign Policy Initiative, concerning war with Iraq, Yugoslavia, Libya and Syria.

Why would Donald Trump want Abrams in the State Department? And why would Rex Tillerson want someone like Abrams as his deputy?