Papayas are spherical or pear‐​shaped fruits known for their delicious taste and sunlit color of the tropics. Upon his arrival to the New World, Christopher Columbus apparently could not get enough of this exotic fruit, reportedly referring to it as the “the fruit of angels.” And the fruit of angels it may indeed be, as modern science has confirmed its value as a rich source of important vitamins, antioxidants and other health‐​promoting substances to the consumer.


Papaya production has increased significantly over the past few years to the point that it is now ranked fourth in total tropical fruit production after bananas, oranges and mango. It is an important export in many developing countries and provides a livelihood for thousands of people. It should come as no surprise, therefore, that scientists have become interested in how this important food crop might respond to increasing levels of atmospheric CO2 that are predicted for the future.


Such interest was the focus of a recent paper published in the scientific journal Scientia Horticulturae by Cruz et al. (2016). Therein, the team of five researchers examined “the effect of the elevated CO2 levels and its interaction with Nitrogen (N) on the growth, gas exchange, and N use efficiency (NUE) of papaya seedlings,” as they note there are no publications examining such for this species to date. To accomplish their objective, Cruz et al. grew Tainung #1 F1 Hybrid papaya seeds in 3.5 L plastic pots in a climate‐​controlled greenhouse at the USDA-ARS Crops Research Laboratory in Fort Collins, Colorado under two different CO2 concentrations (390 or 750 parts per million) and two separate N levels (8 mM NO3- or 3 mM NO3-). CO2 fumigation was performed for only 12 hours per day (during the day, 06:00 h to 18:00 h) and N treatments were applied to the pots weekly as a nutrient solution to reach the desired N levels. The experiment concluded 62 days after treatment initiation. 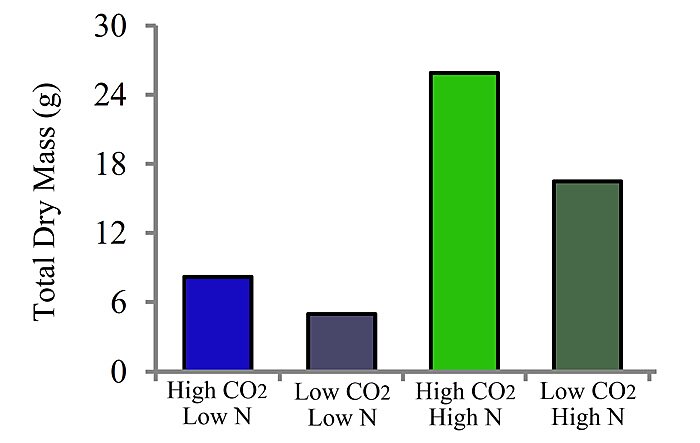 Cruz et al. also report that “significant, but minor, differences were observed in total N content (leaf plus stem + petiole plus roots) between plants grown at different CO2 concentrations, but the same N levels.” Consequently, plant Nitrogen Use Efficiency (NUE) — the amount of carbon fixed per N unit — was around 40 percent greater in the CO2-enriched environments, regardless of the N level in the soil.


Commenting on their findings, Cruz et al. write that contrary to some other studies, which have suggested that low N reduces plant responses to increased CO2 levels, they found no such decline. In fact, their data indicate that elevated CO2 “alleviated the effect of low N on dry matter accumulation in papaya,” which they surmised is at least partially explained by a larger leaf area and higher rate of photosynthesis per leaf area unit observed under elevated CO2.


In light of all of the above, Cruz et al. conclude that “an increase in the atmospheric CO2 concentration [is] beneficial for dry mass production of papaya and alleviate[s] the negative effects of N reduction in the substrate on papaya growth.” Thus, in the future, those who cultivate this fruit of angels should find an angel in the ongoing rise in atmospheric CO2.