This Election Day, Lament That We Have So Little School Choice

This Election Day, there is much more at work in American politics than a poor grasp of civics. If the people are irreconcilably polarized, or heavily inclined to ignore things like constitutional prohibitions on government power, their knowing how government is supposed to work will have little salutary effect. But it surely has not helped our situation that many people are unfamiliar with such civic basics as the three branches of the federal government, or much worse, that many seem to have lost all tolerance for those with beliefs different from their own.

What is to blame for this sad state of civic affairs? At least one culprit, ironically, is public schooling.

Of course, numerous factors likely play into our education system’s troubling civics outcomes, and the greatest may well be that many people just do not care that much about things like how a bill becomes a law. But as University of Arkansas professor Patrick Wolf lays out in School Choice Myths: Setting the Record Straight on Education Freedom, public schooling itself is likely a big problem. Tallying the research comparing civic outcomes for private and public‐​school students, including knowledge of how government works and tolerance for opposing viewpoints, Wolf finds a clear private school advantage.

Looking at the 34 existing studies comparing public and private schools that try to control for student characteristics, encompassing 86 total findings, Wolf reports 50 findings of a private school advantage, 33 no difference, and just 3 showing a public‐​school advantage. When it comes to respecting political rights even of people with views one finds repugnant – perhaps the most important civic value in an extremely polarized country – the score is 13 private advantage, 10 no difference, 1 public. 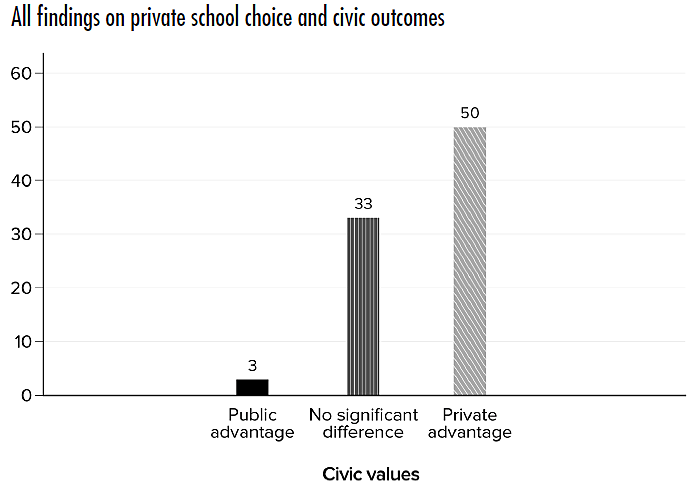 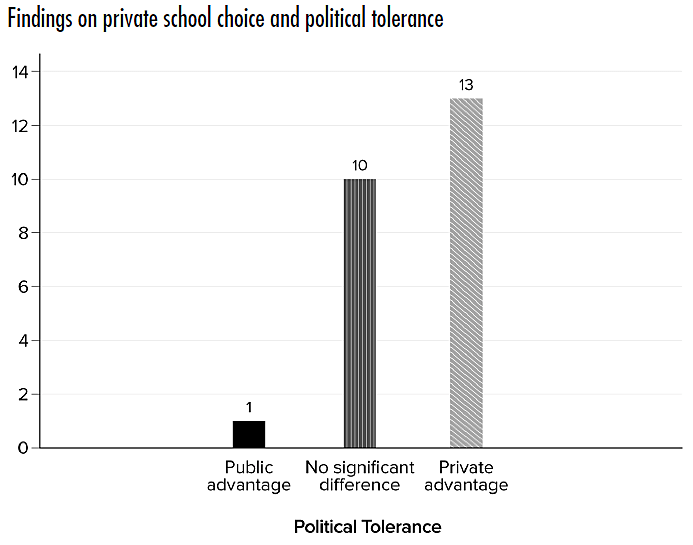 Why this huge differential, especially given that the primary argument for creating public schools was that only they could guarantee the virtuous citizens essential for a democracy?

The answer may be captured in a recent Washington Post article about the minefield public school civics teachers have faced this election season. Many teachers “worry about uttering the wrong word or being misinterpreted and facing backlash from administrators, parents or polarized community members. In a year already blasted by the coronavirus pandemic, job losses and widespread protests for racial justice, teaching about the bitter election battle can feel like a high‐​wire act over a sea of sharks.”

While the 2020 election has been more toxic than others in recent memory, it has only amplified what has long crippled civics ed. As Diane Ravitch tackled in the Language Police in 2004, Berkman and Plutzer captured in their survey work on teaching (or not) evolution in 2010, we chronicle on the Public Schooling Battle Map, and Charles Glenn illuminated about the Nineteenth Century founding of “common schools,” political and social topics have always been tinderboxes, and public school teachers have been heavily incentivized to avoid them. They don’t want to ignite political and social wars.

Why is that a particularly big danger for public schools? Because people with diverse political and social views are forced to pay for those schools, and de facto to use them. That renders areas of disagreement winner‐​take‐​all battlefields, and topics like those in civics, on which diverse people may strongly disagree, minefields to avoid, not bucolic gardens to explore hand‐​in‐​hand.

Private schooling is fundamentally different. No family is forced to use a particular private school, enabling such schools to teach more concrete things in civics, especially wholeheartedly embracing values such as freedom of speech for all. They do not risk nuclear warfare because families that do not agree, rather than having to fight to make their beliefs the ones that must be taught to everyone, can simply take their kids and money elsewhere.

As the painful 2020 election season draws to a close, the irony should not be lost: The education system intended to create knowledgeable and tolerant citizens may well be a major reason we have too little of the civic knowledge and values we need. For better government, we should end government schooling.