The U.S. Department of Commerce’s $400 million Economic Development Administration provides grants and loans to state and local governments, nonprofit groups, and businesses in regions that are supposed to be economically distressed. The EDA is a relic of the 1960s belief that the federal government can solve the problems of distressed urban centers. Its legacy is one of wasteful and politicized spending. Former EDA director Orson Swindle called it a “congressional cookie jar,” and the legendary anti-pork Democrat Senator William Proxmire argued that it “deserves to die.”

But the EDA did not die and its spending is as wasteful as ever. The EDA’s current administrator, John Fernandez, recently gave a speech on economic development under the Obama administration:

Over the past decade, we let our infrastructure crumble … our schools languish … our small businesses fend for themselves. Instead of building foundations, we chased bubbles.

Obama administration officials frequently blame current problems on the previous administration, and to some degree they are right. But it’s fallacious to imply that the Bush administration financially short-changed state and local infrastructure, schools, and small businesses — all of which are activities the federal government shouldn’t be funding to begin with. As Chris Edwards demonstrates, George W. Bush was the biggest spender since LBJ.

By acting decisively, President Obama and his team pulled us back from the brink. Independent economists have just confirmed that the Recovery Act has saved or created more than 1.5 million jobs. The jobs picture is still sobering, but the unemployment trend is nowhere near as bad as it was when President Obama took office. One year ago, our economy was shrinking at rate of 6 percent. Today, it’s growing at a rate of 3 percent.

Regarding these claims, this graph says it all: 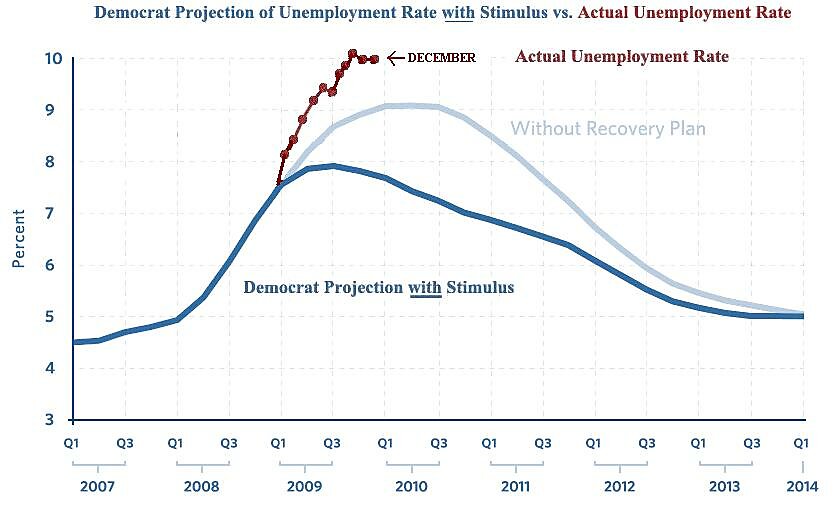 As the president points out, we need to do more than get America back on its feet… We need to take big steps: we need to modernize our education system, revitalize our infrastructure, invest in industries of the future, and create a new entrepreneurial culture in which innovation can flourish… For centuries, we’ve attracted, developed, and nurtured the world’s best talent, and given our citizens a chance to build a better life for themselves and their families.

By “we need” Fernandez means the federal government, not the private sector. Yet this country didn’t become an economic powerhouse because of the Department of Commerce or any other federal bureaucracy. America’s rise to prosperity was fueled by entrepreneurship and the vast investment of private capital initially unhindered by a small and distant federal government. The “big steps” Fernandez wants to take would mean more taxes and debt, which would kill the entrepreneurship and innovation that he lauds.

Fernandez discusses the idea that state and local governments should think of economic development from a regional perspective. Competition for industry and jobs between neighboring jurisdictions should be subordinated to regional economies “planned” by government officials in conjunction with business and civic leaders. He makes a curious statement in this regard:

Our political system rewards mayors, members of Congress, and governors for how much good they did for their constituents in the short term — you don’t get credit for fostering long-term growth. And in recent years, a virtual cottage industry has developed in ranking states on how attractive they are as places to do business: who’s got the lowest labor costs, who’s got the lightest tax load or regulatory burden, and so on.

Unfortunately, the growing centralization of power at the state level at the expense of local autonomy, and similar unhealthy relationship between the federal government and the states, inhibits this healthy competition.

Although he denies it, it’s planning and centralization that Fernandez seems to view as the ideal. State and local officials should be “collaborating” on regional economic development because the real competition is foreigners. And who better to deal with foreigners than Uncle Sam?

[F]or the past decade, federal support for these regional efforts has been too limited. Too fragmented. Too inconsistent. The federal government has not been a reliable partner… What Washington can do — and under President Obama, what Washington has begun to do — is to facilitate collaboration. To provide a framework for that discussion among all the stakeholders. To help regions assess their competitive strengths. To help them design a strategy to bring together the technology, the human capital, and the financial capital it will take to compete. And to provide seed money for turning a region’s unique strategy into reality.

According to Fernandez, this is “where the Economic Development Administration comes in.” On cue, he proceeds to provide a litany of all the wonderful things his agency is doing. None of it is worth quoting, as it’s the same warmed-over subsidy ideas we’ve been hearing from federal officials for decades. The fact is the EDA is a $400 million economic development program in a $14 trillion economy. Even though that’s $400 million taxpayer dollars too many, it nonetheless amounts to a pothole on the nation’s economic superhighway.

See this essay for more on why the Economic Development Administration should be abolished.