Weighted by the confidence of their answers, 99 percent of responders disagree or strongly disagree that a requirement the federal government balance the books would reduce output volatility; whilst 53 percent disagree with the view that it would lower federal borrowing costs. 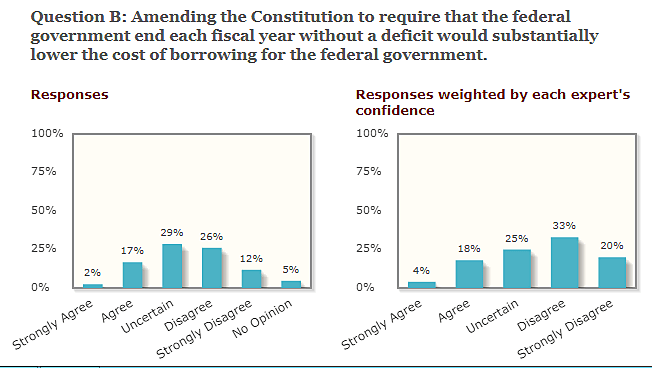 This is timely. House Speaker Paul Ryan (R‑WI) has tasked Rep. Doug Collins (R‑Ga.) as part of a 22‐​person strong task force to consider alternative fiscal rules to the debt ceiling to help constrain the growth of US federal government debt. The task force offers its recommendations in December. Whilst the task force’s remit does not extend to constitutional change, the cost and benefits of different fiscal rules are bound to shape their thinking.


Why do economists demur over an ex‐​post balanced budget requirement that forces balance every year? Two main answers appear. First, there’s the Keynesian argument that fiscal policy can and should be used to smooth the business cycle, especially via discretionary deficit‐​spending during recessions. In this view, a balanced budget amendment can exacerbate output volatility by outlawing potentially helpful fiscal support and enforcing cuts when the economy is in a cyclical downturn.

Second, there’s Robert Barro’s “tax smoothing” argument, which says a government can minimize the distortionary impact of taxation by keeping tax rates relatively smooth or constant and allowing government debt to be a shock‐​absorber to unexpected shocks.


I’d add two more. The risk of major within‐​year changes to the funding programs greatly increase uncertainty for many individuals and households and makes budgeting very difficult. And a balanced budget amendment could incentivize governments to run up high spending and new programs during boom periods when there’s a “windfall” in terms of tax revenues. These could then prove “sticky” and difficult politically to get rid of, running the risk of even larger government overall with a higher tax burden in the long‐​term.


Economists have long recognized these problems, which is why other countries that have adopted forms of “balanced budget rules” have not adopted strict ex‐​post rules that do not permit any deficits.


Most modern rules in countries deemed to be successful instead seek to cap government expenditures in any given year based on trends in revenues or some estimate of “potential” GDP, meaning that revenues and hence spending caps are largely “cyclically adjusted.”


This “structural balance” means, in theory, surpluses during boom periods and deficits during periods where growth is weaker‐​than‐​trend or below potential. The result, if trends remain constant or potential GDP is estimated correctly, is the debt‐​to‐​GDP path falls overall during the business cycle, with nominal GDP rising and the budget balanced over the cycle.


The details, of course, are very different depending on the country. Switzerland stabilizes spending around a revenue trend with its so‐​called “debt brake,” with any deviations from forecasts within‐​year made up over longer periods. Their rule is constitutionally‐​grounded.


Chile targets a structural balance through spending caps based upon estimates of potential GDP and the price of copper calculated by independent committees, but with no consequences if outturns differ from forecasts.


Sweden has a rule requiring a budget surplus equal to 1 percent of GDP on average over the business cycle, but with more freedom for governments to run structural deficits (provided they make up for them later).


All of these are more complex than a simple balanced budget requirement. And they come with risks. In particular, most of them are vulnerable should trends in economic growth change substantially, or the economy’s output gap gets calculated incorrectly — highly likely, given estimating it correctly requires measuring accurately current GDP, potential GDP, and how spending and revenues would react to moving towards potential GDP. But overall, they are more economically sensible than a rigid year‐​on‐​year balanced budget rule.”


I’ll blog in the coming weeks about other countries’ specific experiences with these types of fiscal rules. But one conclusion that stands out from the vast literature is that rules require buy‐​in both from the political class and the broader public to be effective. It is no coincidence, for example, that Sweden introduced its rule after a budget crisis in the 1990s, and Switzerland’s constitutional rule was delivered after obtaining 85% support from voters in a 2001 referendum. Without a broad consensus behind a rule, politicians seek to circumvent them with clever accounting, off‐​balance‐​sheet wheezes, optimistic forecasts and, ultimately, abandoning the rules when they start to bind.


Asking whether particular fiscal rules could be applied to the US federal government, in a technocratic sense, puts the cart before the horse. Yes, rules can bring focus on an issue and provide a framework for budgeting. But the elephant in the room is the question: does the US have the political will to move towards fiscal discipline? Bill White’s “American’s Fiscal Constitution” shows that in the past such a consensus for fiscal probity existed. But given the federal budget is now used for so many purposes, and with the political parties so divided on the optimal size of the state, could such a consensus exist again?