The Economics of Trade: Wilbur Ross Is Mistaken

Billionaire investor Wilbur Ross, a supporter of Donald Trump, made the following comment in a letter to the Wall Street Journal (Aug 15): “It’s Econ 101 that GDP equals the sum of domestic economic activity plus “net exports,” i.e., exports minus imports.  Therefore, when we run massive and chronic trade deficits, it weakens our economy.”

In reality, the last sentence –beginning with “Therefore”– does not follow from the first.

Mr. Ross is alluding to the demand side of National Income Accounts, wherein Y=C+I+G+ (N-X). That is, National Income (Y) equals spending on Consumption (C) plus Investment (I) plus Government (G) plus Net Exports (Imports N minus Exports X).

Taking such accounting too literally, a reduction in imports may appear to be mathematically equal to an increase in overall real GDP.  But that is dangerously incorrect, as the 1930s should have taught us.

The accounting is true by definition (a tautology). But economics is about behavior, not accounting identities. 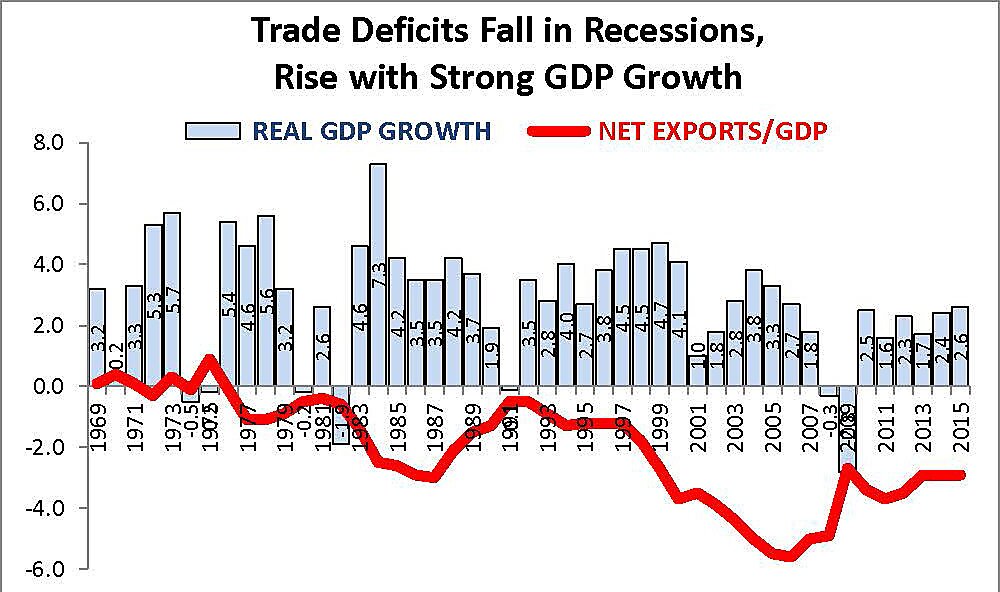 The graph compares net exports (N-X) as a percentage of GDP with the annual growth of real GDP.  What it clearly shows is that trade deficits fall in recessions and grow larger in periods of strong economic growth. Trade was in surplus during the recession of 1970 and 1975, and the trade deficit shrank to trivial size in the recessions of 1980-82 and 1990-91. Trade deficits were largest in 1983-89 and 1997-2000 when real GDP was growing by 4.4 percent a year. Trade deficits also expanded in 2003-2006, when real GDP was growing by 3.2 percent a year. As real GDP growth slowed to 2 percent from 2011 to 2015, the trade deficit stabilized near 2.9 percent of GDP.

The main reason trade deficits are inversely related economic growth, contrary to elementary accounting, is that U.S. industry needs more imported parts and raw materials when the economy expands, and consumers can afford more imported luxuries when their incomes and investments are rising. A secondary reason is that whenever the United States is growing faster than the economies of major trading partners (such as Japan, EU, Canada), their demand for U.S. exports is likely to lag our demand for their exports.

Does Y=C+I+G+(N-X) imply that raising tariffs to increase the cost of imports to U.S. families and firms will somehow make their real incomes grow faster?  Of course not. Paying more for less would make Americans poorer, not richer.  If the price of widgets went up by 35 percent because of a tariff, fewer widgets would be sold and fewer Americans would be employed making them.