Economic growth is a poorly understood phenomenon by economists.  There are many schools of thought and models that try to understand it but we are far away from understanding it as well as how micro markets function.  We may never do so.  But there seem to be two non-mutually exclusive ways that growth increases.  The first is called intensive growth whereby our economy becomes more efficient and produces the same amount of output for equal or lesser inputs.  The second is called extensive growth whereby economic output increases because more factors of production are added such as capital, land, entrepreneurship, or laborers.

Based mainly on extensive growth, many economic models try to predict how changes in the U.S. population affect gross domestic product (GDP), itself an imperfect measure.  Immigration is the primary contributor to population growth in the United States both through their movement here and their subsequent birth of children.  More people in the United States, at a minimum, increase the quantity of two factors of production: labor and entrepreneurship.  Land is relatively fixed and capital adjusts based on population.  The National Academies of Sciences (NAS) report on immigration and economic growth concluded that (page 317):

Immigration also contributes to the nation’s economic growth. Most obviously, immigration supplies workers, which increases GDP and has helped the United States avoid the fate of stagnant economies created by purely demographic forces—in particular, an aging (and, in the case of Japan, a shrinking) workforce.  Perhaps even more important than the contribution to labor supply is the infusion by high-skilled immigration of human capital that has boosted the nation’s capacity for innovation and technological change. The contribution of immigrants to human and physical capital formation, entrepreneurship, and innovation are essential to long-run sustained economic growth. Innovation carried out by immigrants also has the potential to increase the productivity of natives, very likely raising economic growth per capita. In short, the prospects for longrun economic growth in the United States would be considerably dimmed without the contributions of high-skilled immigrants.

The NAS report argues that there are substantial technological spillovers that boost economic growth but those are impossible to predict.  Thus, I use a simple back of the envelope calculations to show how GDP growth through 2060 would alter under the Trump plan.  This includes Census population projections under the current policy.  I then subtract legal immigration and adjust births and deaths accordingly.  I assume annual GDP growth of 2 percent under the current policy but 1.75 percent under the Trump plan to take account of the Wharton Model’s findings concerning the Trump-inspired RAISE Act and the research of economist Joel Prakken.

GDP Under Trump’s Immigration Plan Versus the Status Quo 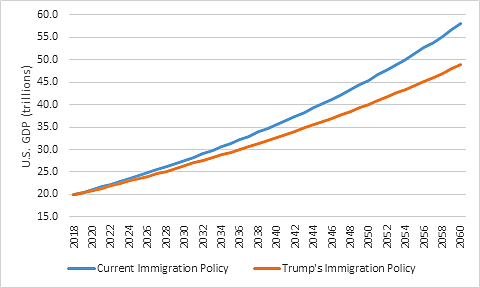 American Population Under Trump’s Immigration Plan Versus the Status Quo 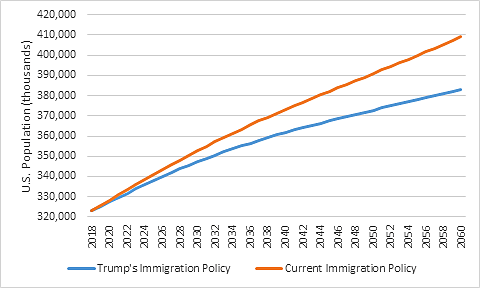 Most commentators and policymakers are interested in the minuscule and mostly positive effect that immigration has on wages.  In contrast, the impact of immigration policy on economic growth is far larger and more important.  The size of the economy is a great measurement of national wealth and material abundance that should be the focus of any debate over the economic merits of immigration policy.