The recent deaths of ten illegal immigrants in San Antonio, Texas are a gruesome example of the human costs of severe immigration restrictions. The immigrants wanted to be smuggled into the United States and, presumably, paid somebody for that service. They had no way to enter lawfully because the United States government allows in few temporary migrants to work in a handful of occupations and there is essentially no green card category for low skilled workers. Many of these people face the choice of continued poverty in their home countries or taking a risk at a better life working in the American black market. Attempting to work in the United States is risky and sometimes leads to deaths because of immigration enforcement and more enforcement will result in more deaths.

These immigrants did make the choice to break American immigration laws but it does not follow that they are the ones to blame for their own deaths, despite what some restrictionists think. Immigration laws are primarily designed to stop Americans from voluntarily hiring, contracting, or selling to willing foreigners. If the immigration laws were concerned primarily with protecting the rights of Americans and those illegal immigrants who died in the Texas heat intended to do harm, had serious criminal records, or there was another excellent reason to think they would have hurt people here, then their deaths could be a defensible cost of a rational system that does more good than harm. At the very minimum, one could claim that the law that incentivized them to enter the black market at great risk was intended to protect people. But nobody familiar with our immigration laws or the net-positive effect of immigrants on Americans can make that argument with a straight face. These illegal immigrants died because of an international labor market regulation.

Border Deaths and Apprehensions on the Southwest Border 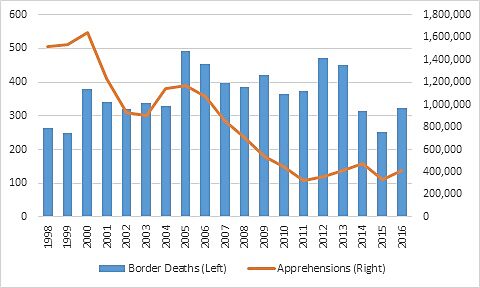 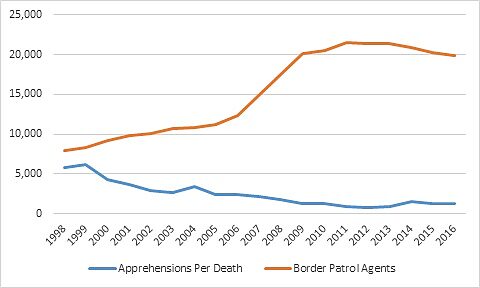 This is not surprising as research shows more border enforcement leads to more smuggling and higher smuggling prices – both of which increase the riskiness of crossing and, for instance, dying in a shipping container in the Texas summer.

The government’s primary means of halting illegal immigration is through deterrence – creating so much fear in the minds of would-be illegal immigrants that they do not even try to enter. However, deterrence does not work on everybody. One effect of so much deterrence is that some people try different and riskier ways of entering the United States, such as in a shipping container in the Southwest in the heat of summer. The result is more danger and more death.

Those extra deaths, tragic as they are, might be worth it if the immigration laws save more lives in the United States by preventing criminals or terrorists from entering – but they clearly do not, and few serious people are trying to make that case. The deaths of people who mean no harm to others is a predictable result of immigration laws intended to protect the American labor markets, culture, or the other justification de jour. It’s time that people start weighing human cost when considering legal reforms.