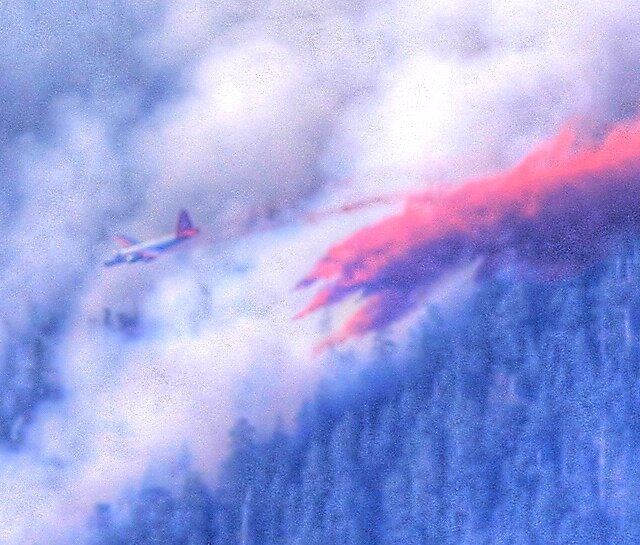 The Forest Service puts out fires by dumping money on them.

Having a blank check is nothing new for the Forest Service. In 1908, Congress literally gave the agency a blank check for fire suppression, promising to refund all fire suppression costs at the end of each year. As far as I know, this is the only time in history that a democratically elected legislature gave a bureaucracy a blank check to do anything: even in wartime, the Defense Department had to live within a budget.

Due to rising firefighting costs, Congress repealed the Forest Service's blank check in about 1978, giving the agency a fixed amount each year and telling it to save money in the wet years to spend in the dry years. The agency actually reduced its costs for about a decade, but then two severe fire years in 1987 and 1988 led the Forest Service to borrow heavily from its reforestation fund. Congress eventually reimbursed this fund, and costs have been growing ever since.

In the 1970s, when firefighting costs were so out of control that Congress repealed the blank check, the agency spent about 10 to 20 percent of its national forest management funds on fire. Today, even though the agency's budget has kept up with inflation, more than half goes for fire.

Yet there is some restraint on what the agency spends. In severe fire years, it has to borrow money from its other programs, putting a crimp in those activities. Congress eventually reimburses that money, but in the meantime fire managers are aware that their spending is having an impact on other agency projects.

The new law would eliminate even this restraint. Proponents argue that this will protect those other Forest Service programs from disruption, but since they are eventually funded anyway all it will really due is unleash fire managers to spend without limit (at least up to $2.9 billion, after which Congress will no doubt up the limit).

Firefighters on the ground are acutely aware of this difference. They sometimes say that the Forest Service fights fires by dumping money on them. Firefighters who work for the BLM, Park Service, or other Interior agencies look with awe on Forest Service firefighters and the resources they can bring to bear against fire.

Yet a lot of that spending is of little value. The rest of the saying about the Forest Service dumping money on fires goes, ". . . until it rains, and then the rain puts the fire out."

Some in the Forest Service argue that firefighting costs have grown because decades of fire suppression have left the forests more prone to fire. This is contradicted by a 2002 Forest Service report that found that, unlike southern forests, most western forests are not susceptible to becoming more fire prone in the absence of fire, and of those that are, only a portion have been significantly altered by years of fire suppression (which frankly, wasn't very successful anyway). The report concluded that only about 6 percent of federal lands in the West were more susceptible to fire due to fire suppression.

Historically, acres burned have always been a function of the percent of land that is severely to extremely dry in the summer months (July, August, and September). The correlation between this number and the number of acres burned is greater than 90 percent. If a few fires have been larger in recent years, it is mainly because, since the 1994 South Canyon Fire that killed 14 firefighters, the Forest Service has allowed more acres to burn in order to protect firefighter lives.

The best solution would be to stop subsidizing national forest management altogether and let forest managers figure out how much to spend on fire out of the user fees they collect. Short of that, the Forest Service could contract out its firefighting needs to state forest fire agencies, which the BLM and other Interior agencies sometimes do to save money.

Instead, HR 167 proposes to deal with fire by dumping money on it. "Let's be clear: we are always going to pay whatever it costs to fight catastrophic wildfires," say the bill's proponents. "We do this today, and we will continue to do so." They obviously don't realize that this approach simply makes firefighting more expensive.