Dramatic Increase in Poverty Rate: One Small Step for Obama, One Giant Step for the So‐​Called War on Poverty

The Census Bureau has just released the 2010 poverty numbers, and the new data is terrible.


There are now a record number of poor people in America, and the poverty rate has jumped to 15.1 percent.


But I don’t really blame President Obama for these grim numbers. Yes, he’s increased the burden of government, which doubtlessly has hindered the economy’s performance and made things worse, but the White House crowd legitimately can argue that they inherited a crummy situation.


What’s really striking, if we look at the chart, is that the poverty rate in America was steadily declining. But then, once President Lyndon Johnson started a “War on Poverty,” that progress came to a halt.


As I’ve explained before, the so‐​called War on Poverty has undermined economic progress by trapping people in lives of dependency. And this certainly is consistent with the data in the chart, which show that the poverty rate no longer is falling and instead bumps around between 12 percent and 15 percent. 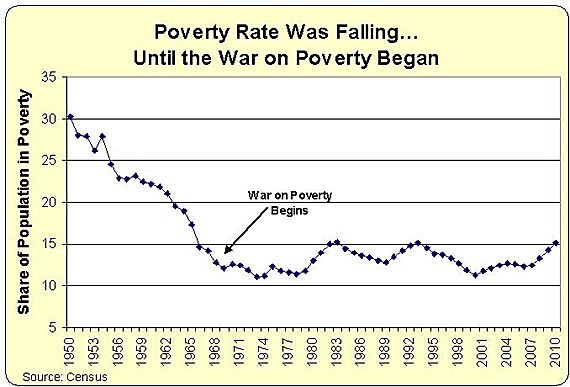 This is bad news for poor people, of course, but it’s also bad news for taxpayers. The federal government, which shouldn’t have any role in the field of income redistribution, has squandered trillions of dollars on dozens of means‐​tested programs. And they’ve arguably made matters worse.


By the way, just in case you think I’m being too easy on Obama, read this post about how the Administration is considering a terrible plan to re‐​define poverty in order to justify ever‐​larger amounts of redistribution.


I fully agree that the president’s policies definitely have made—and will continue to make—matters worse. But the fundamental problem is 40‐​plus years of a misguided “War on Poverty” by the federal government.