In a new op‐​ed I take issue Rep. Duncan Hunter (R-CA) for his unstinting support of maritime special interests and the Jones Act at the expense of average Americans. Particularly egregious is Hunter’s promotion of a recent report funded by a special interest group, the American Maritime Partnership, which makes the incredible claim that the Jones Act imposes no cost to consumers in Puerto Rico. Indeed, Hunter actually presided over a gathering of the House Subcommittee on Maritime Transportation meant to highlight its dubious findings.

While Hunter’s support for the AMP and the unseemly nexus between legislators and maritime special interests is the op-ed’s focus, the shortcomings of the AMP‐​funded report are worth exploring in greater detail.

From simply a theoretical perspective, the notion that the Jones Act would leave consumers in Puerto Rico unscathed is highly implausible. The Jones Act, which among other provisions prohibits foreign‐​flagged ships from transporting cargo between domestic ports and Puerto Rico, is a protectionist law. Keeping out competition is the entire point. It violates our understanding of economics to believe this is consequence‐​free for either costs or prices. Further note that competition among Jones Act carriers that provide service to Puerto Rico is sufficiently restrained that several of them were found guilty of price fixing.

Even if we were to believe that a perfectly competitive market exists in Puerto Rico despite the Jones Act’s restrictions, let us also remember that the law raises costs to those providing cargo transport by mandating the use of ships built in the United States. These ships are wildly more expensive than those constructed overseas, with a purchase price up to eight times higher. If consumers aren’t feeling the impact of these higher costs, then who is? Are we to believe that profit‐​maximizing companies that transport the cargo or the retailers who sell the goods in Puerto Rico happily absorb the costs of these expensive vessels?

If the theoretical underpinnings of the AMP’s claim are questionable, the methodology used to support it is doubly so. The finding that the Jones Act has no impact on consumers in Puerto Rico is in large part based on a price comparison, conducted via Walmart’s website, for 10 grocery items and three durable goods at the retailer’s locations in Jacksonville, Florida and San Juan, Puerto Rico. For these 13 items the price of each was found to be either the same or less in San Juan. 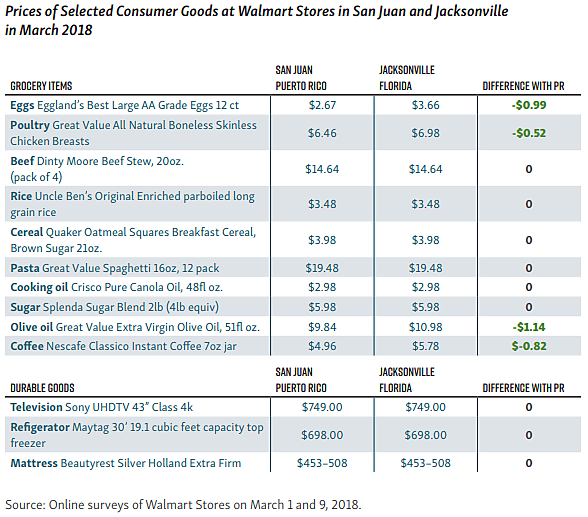 The defects of this approach are numerous. For starters, no explanation is provided for how the basket of goods was selected. Walmart sells thousands of items—why were these chosen? This is significant as it isn’t difficult to find items for sale at both locations that tell a rather different story. A 48 oz container of Breyers ice cream, for example, is priced at $2.98 in Jacksonville but $8.12 in San Juan. Numerous other price discrepancies indicating a premium paid by consumers in San Juan are easily found.

Beyond questions over how the limited basket of goods was selected, one must also wonder why Walmart should be considered representative of Puerto Rico’s retail sector and the impact that the Jones Act has on the territory’s consumers. Walmart is an extraordinarily efficient firm famous for its ability to squeeze margins from suppliers, likely including those it depends on for transportation. Do other retailers in Puerto Rico enjoy Walmart’s cost structure, or share in any discounts on ocean transport it is able to negotiate?

Furthermore, why should retail prices be regarded as a proxy for transportation costs or evidence of their burden? As Crowley Maritime, a member of AMP and the largest carrier that provides service to Puerto Rico states, “There are many factors affecting prices on the island – energy, taxes, trucking, warehousing, rent, market size and more.” Indeed. Unless all other costs are controlled for, the impact of transportation alone is unknowable.

One retailer. Thirteen items. No explanation for how the goods are selected. No controls to isolate the cost of transportation. And yet on this basis we are offered a rather sweeping conclusion.

A conclusion, it should be added, that is at odds with respected resources on cost of living differences in the United States. According to the Instituto de Estadísticas de Puerto Rico, grocery items in the territory are the 13th most expensive out of 297 locations in the United States. The group also shows food items, contra the AMP report, as 18.4 percent higher in Puerto Rico than in Jacksonville.

Other aspects of the report’s approach are similarly questionable. To bolster its case that the Jones Act does not impose higher costs on Puerto Rico the report offers up a chart (based, it appears, on confidential data from the carriers that is unverifiable) which shows revenue per container for ships traveling between the continental United States and other ports in the northern Caribbean: 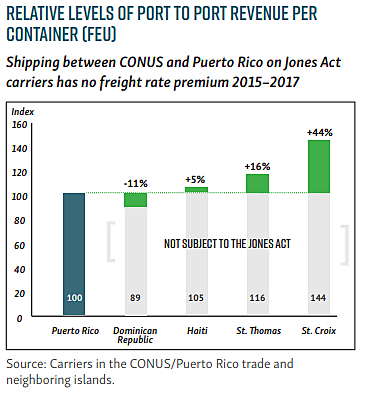 At first glance this appears to show that Puerto Ricans are getting a relative deal compared to a number of neighboring islands, but are they really? St. Croix, for example, has a smaller container port than San Juan, and likely operates with less efficiency due to its reduced scale. The fact that Puerto Rico has vastly greater trade volumes with the rest of the United States—nearly four times that of other Caribbean countries combined per a 2002 report—also likely unlocks efficiencies unavailable to other Caribbean ports.

To the extent higher revenue per container reflects the higher prices necessary to cover the higher costs of providing service on less efficient routes, this tells us nothing about the Jones Act’s impact or what freight rates between Puerto Rico and the continental United States might look like in a post‐​Jones Act environment. In short, it is not apparent that this is an apples‐​to‐​apples comparison or that such figures provide much in the way of relevant information.

The remainder of the report in large part consists of claims about the high level of service provided by Jones Act carriers to Puerto Rico. It cites, for example, that the use of “vessels and intermodal equipment that are uniquely designed to closely integrate the commonwealth with the advanced logistics systems of the mainland provides cargo owners with major economic and service advantages.”

But the alleged advantages and cost‐​effectiveness of the Jones Act carriers raises the question of why the law is then needed. If the Jones Act carriers already provide a high‐​quality service at a competitive price, then why should they fear a change to the status quo? If they are as competitive as they claim to be, why not open the market for sea transport with other parts of the United States to foreign competition?

The evident fear of such competition and employment of dubious analytical methods are instructive. Equally so is that pro‐​Jones Act politicians such as Duncan Hunter eagerly seize on this special interest‐​funded report despite its obvious flaws. It’s time to give the residents of Puerto Rico, and the rest of the United States, a break from this costly and outdated law.