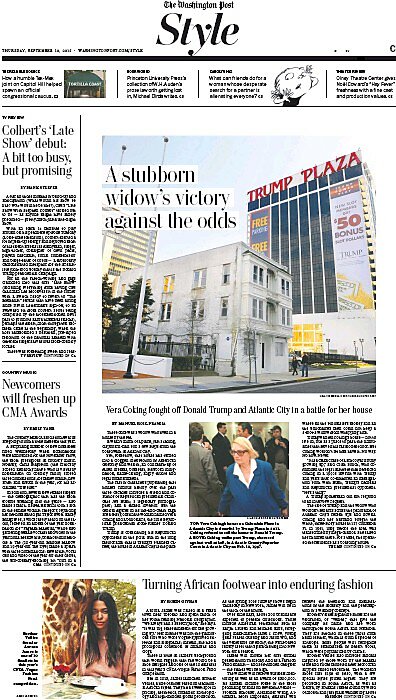 Three weeks ago I wrote in the Guardian about Donald Trump’s years‐​long effort to use eminent domain to take Vera Coking’s Atlantic City house, along with two nearby small businesses, in order to build a limousine parking lot for his Trump Plaza hotel. Coking’s house may not have been paradise, but as Joni Mitchell would say, Trump wanted to pave it and put up a parking lot.


Today the Washington Post splashes the story of the billionaire and the widow across the front of its Style section. It’s a story that deserves further attention.

For more than 30 years Vera Coking lived in a three‐​story house just off the Boardwalk in Atlantic City. Donald Trump built his 22‐​story Trump Plaza next door. In the mid‐​1990s Trump wanted to build a limousine parking lot for the hotel, so he bought several nearby properties. But three owners, including the by then elderly and widowed Ms Coking, refused to sell.


As his daughter Ivanka said in introducing him at his campaign announcement, Donald Trump doesn’t take no for an answer.


Trump turned to a government agency – the Casino Reinvestment Development Authority (CRDA) – to take Coking’s property. CRDA offered her $250,000 for the property – one‐​fourth of what another hotel builder had offered her a decade earlier. When she turned that down, the agency went into court to claim her property under eminent domain so that Trump could pave it and put up a parking lot.

Trump consistently defended his use of eminent domain. He told John Stossel, “Everybody coming into Atlantic City sees this terrible house instead of staring at beautiful fountains and beautiful other things that would be good.” Later, after the Supreme Court upheld the use of eminent domain to take property from one owner for the benefit of another private owner, he told Neil Cavuto,

“I happen to agree with it 100%. if you have a person living in an area that’s not even necessarily a good area, and … government wants to build a tremendous economic development, where a lot of people are going to be put to work and … create thousands upon thousands of jobs and beautification and lots of other things, I think it happens to be good.”

Manuel Roig‐​Franzia of the Post adds lots of colorful detail to the story. He notes how the Institute for Justice represented Coking in court — and won. “In the long melodrama that is Trump’s business career, the house in Atlantic City is the place where all the billionaire’s money and all the billionaire’s men couldn’t keep a 5‐​foot‐​3 widow from whupping him”–with the government on his side and IJ on hers.