Argentina is once again wrestling with its long-time enemy, inflation. Now, it appears history may soon repeat itself, as Argentina teeters on the verge of another currency crisis. As of Tuesday morning, the black-market exchange rate for Argentine pesos (ARS) to the U.S. dollar (USD) hit 9.87, meaning the peso’s value now sits 47.3% below the official exchange rate. This yields an implied annual inflation rate of 98.3%. For now, the effects of this elevated inflation rate are being subdued somewhat by Argentina’s massive price control regime. But these price controls are not sustainable in the long term. Indeed, the short-term “lying prices” only distort the economic reality, ultimately leading to scarcity. There is, however, a simple solution to Argentina’s monetary problems: dollarization. I have advocated dollarization in Argentina for over two decades, well before the blow up of their so-called “currency board.” To put the record straight, Argentina did not have a true currency board from 1991 to 2002. Rather, as I anticipated in 1991, the “convertibility system” acted more like a central bank than a currency board. This pegged exchange rate system was bound to fail—and fail, it did. The 2001-02 Argentine Crisis could have easily been avoided if the country had simply dollarized. Argentina had more than sufficient foreign assets to dollarize their economy even late into 2001. But the Argentine government, through a series of policy blunders, ended up “floating” the currency. Not surprisingly, Argentina is now back to where it was in the late 1980s. So, how can Argentina dollarize? In short, the Banco Central de la Republica Argentina (BCRA) would take all of the assets and liabilities on its balance sheet denominated in foreign currency and convert them to U.S. dollars. The Central Bank would then exchange these dollars for all the pesos in circulation (monetary base), at a fixed exchange rate. By my calculation, the BCRA would need at least $56.36 billion to dollarize at the official exchange rate (as of April 23, 2013). 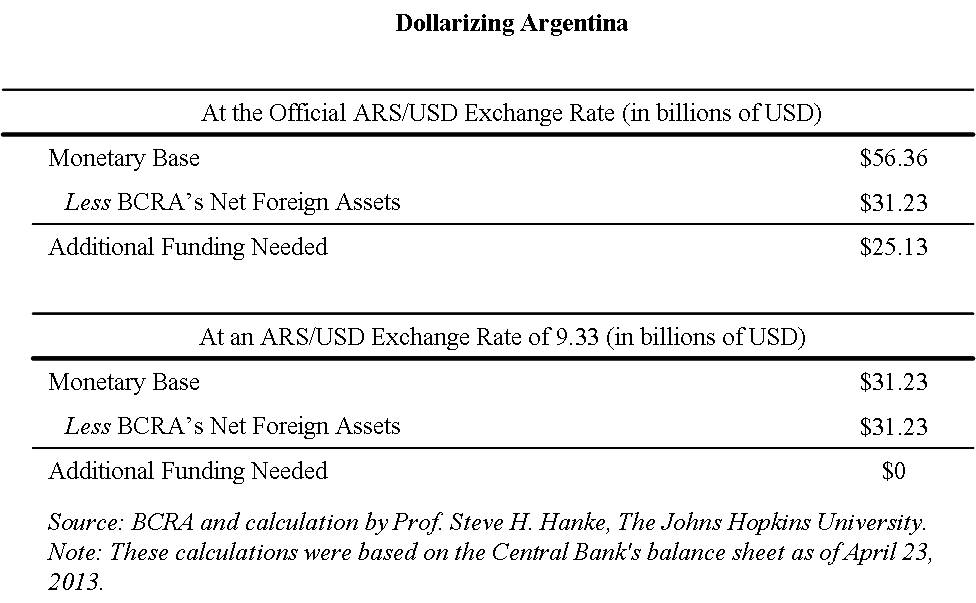 The end result would be an Argentine economy free of the inflation that has plagued it for decades. Indeed, Argentina could finally experience those benefits enjoyed by other dollarized countries, like Ecuador. Below, I present (with only one minor change) my blueprint for Argentina’s dollarization, which I first presented over a decade ago.