Political chaos and institutional meltdowns are all too common in Ecuador’s recent history. A cynic could even interpret yesterday’s violent police uprising that threatened the continuity of President Rafael Correa’s government as “a return to normalcy” in a nation that has had 10 presidents in the last 15 years.


Yet, despite the chaotic nature of its politics, Ecuador has enjoyed relative economic stability since it adopted the U.S. dollar as its official currency on January 9, 2000.


In a country where presidents are regularly toppled by mob protests or popular uprisings, it can be expected that the economy—and particularly the value of its currency—would go into a tailspin with every crisis. This was precisely what happened in the decade prior to 2000, when inflation averaged 37.5% per annum. However, in the 10 years since dollarization, the yearly inflation rate has averaged 6.8%. This number is itself inflated by the fact that inflation reached a peak of 91% in the first year of dollarization, and remained high the following year too. (That initial high rate is explained by the fact that, at the time of adopting the dollar, the government set a particularly high conversion rate for the sucre, Ecuador’s old currency, forcing a massive devaluation that led to high inertial inflation that year.) However, Ecuador’s inflation rate rapidly went down and has largely converged with that of the United States in recent years. 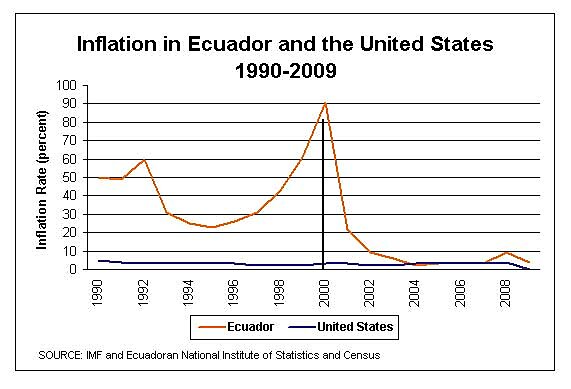 Of course, there are no silver bullets in economic development. Ecuador’s sound monetary policies have not been matched by similar coherent reforms on taxes and spending, or in the areas of trade policy, or labor and business regulations, for example. Ecuador stands in dismal 109th place (out of 141 economies) on economic liberty, according to the latest Economic Freedom of the World report. However, even as their country’s political and democratic institutions constantly fall apart, Ecuadorians can take satisfaction that the value of their currency is not under threat thanks to dollarization.