Does Donald Trump Think Washington Politicians Should Have More of Our Money to Prop Up the Entitlement State?

I have a very straightforward rule when assessing politicians. Simply stated, if they are open to tax hikes, then it's quite likely that they have no desire to control the size, cost, and power of the federal government.

Based on that rule, I'm skeptical about Donald Trump.

To understand my doubts, here are some passages from a story on the topic in the New York Times.

For years, Republicans have run for office on promises of cutting taxes... But this election cycle, the Republican presidential candidate who currently leads in most polls is taking a different approach... Mr. Trump has...suggested he would increase taxes on the compensation of hedge fund managers. And he has vowed to change laws that allow American companies to benefit from cheaper tax rates by using mergers to base their operations outside the United States.

These policy positions are raising a lot of eyebrows.

“All of those are anti-growth policies,” said David McIntosh, the president of the Club for Growth... “Those aren’t the types of things a typical Republican candidate would say,” said Michael R. Strain, a scholar at the conservative American Enterprise Institute, referring to the candidate’s comments on hedge funds, support for entitlement spending and the imposing of trade tariffs.

And Trump's failure to sign the no-tax-hike pledge exacerbates the concerns, particularly when combined with his inconsistent statements on tax reform.

Mr. Trump and former Gov. Jeb Bush of Florida are the only leading Republican candidates who have not signed a pledge to not raise taxes. ...In an interview with Fox News last week, Mr. Trump said a flat tax would be a viable improvement to America’s tax system. Moments later, he suggested that a flat tax would be unfair because the rich would be taxed at the same rate as the poor.

Byron York of the Washington Examiner writes about Trump's fiscal policy in the context of traditional Republican orthodoxy.

Trump is preparing a tax proposal that will again set him far apart from the party's powers-that-be. ...Trump has been sending signals that his tax proposal, which he says will be "comprehensive," will include higher rates for some of the richest Americans, a position generally at odds with Republican orthodoxy. "I want to see lower taxes," Trump said at an appearance in Norwood, Mass., on Friday night. "But on some people, they're not doing their fair share."

And if his campaign manager is accurately channeling Trump's views, the candidate even equates higher taxes with making America great.

Trump campaign manager Corey Lewandowski would say little about Trump's intentions, but noted that "Mr. Trump has said that he does not mind paying what is required to make our country great again." Raising taxes on anyone, even the super rich, has generally been anathema to Republicans for a generation.

Wow, what's next, a Biden-esque assertion that higher tax payments are patriotic?!?

Though, to be fair, it's unclear whether Trump actually wants the federal government to have more money.

Perhaps the tax increases that he supports would be offset by tax cuts elsewhere, which is what would happen with major tax reform proposals such as the flat tax.

Though the fact that Trump so far has refused to sign the no-tax-hike pledge obviously makes that a risky assumption.

In his column for the New York Times, Ross Douthat also wonders whether Trump will upend existing GOP thinking.

In movement conservatism, there’s an ongoing, interesting tension between starve-the-leviathan theories and the supply-side vision, exemplified by the Wall Street Journal editorial page among other sources, in which low taxes on high incomes and investment can allegedly make the public coffers fuller. ...my own (modest) faction, the reform conservatives, whose preferred tax vision (in its varying forms) basically seeks a rebalancing of conservative tax policy, an approach that’s still responsive to supply-side and pro-growth ideas but also addresses both the anxieties of middle class families... The Republican Party is the limited-government, anti-tax party, and the weird rise of Trumpism isn’t going to change that basic fact. But the way anti-tax sentiment manifests itself, and the policies associated with those sentiments, can alter with time and circumstances, and for the G.O.P.’s sake they need to change right now.

I'm mostly in the starve-the-beast camp, though I like the supply-side approach (perfectly captured in this image) because of the recognition of how good tax policy boosts growth.

And I see the "reform conservatives" as allies even if their ideal version of tax reform has a few warts.

So I'm willing to have a "big tent"...but I want the tax-increase crowd on the outside because they would enable bigger government.

I guess it remains to be seen whether Trump's in that distasteful group.

P.P.S. One of the reasons Trump may be weak on taxes is because he has no desire to control spending. You don't have to believe me. These are his own words.

Let's take a look at "where the money is." 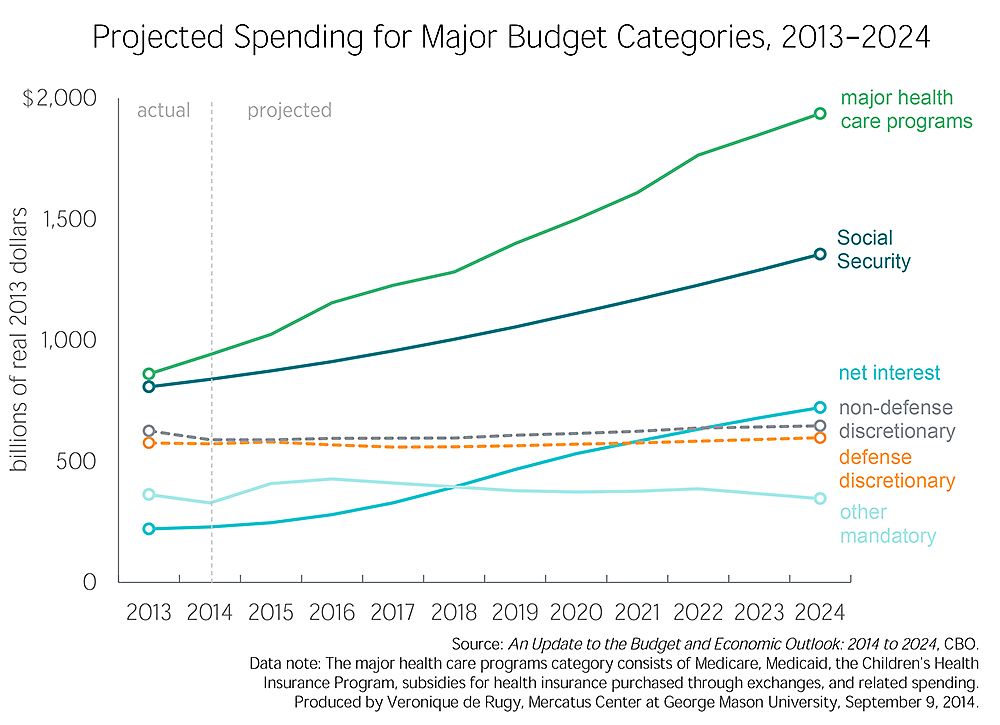 If "The Donald" doesn't think we need genuine entitlement reform, there are only a few possible explanations.

If it's the final option, he's the GOP version of Bernie Sanders.