Amid the din of James Carville's screeching, you may have missed a couple of reasonable voices taking issue with the "do something, Superpresident!" approach that's dominating the discussion of the Gulf Spill. (They both mention Cato work, which is a bonus).

In the Daily Beast, Tunku Varadarajan writes that this isn't

“Obama’s oil spill,” if by saying so we mean to ascribe culpability to the president. He didn’t run the rigs, or oversee the plans, or grant the licenses to drill, or write the rules that govern the granting of those licenses. He was just president when the bloody thing happened.

(Varadarajan links to this piece by Peter Van Doren and Jerry Taylor on what the spill says about "the profound intellectual poverty animating our public conversation about energy policy.")

Over on the New York Times' website, Glenn Greenwald cites my book, The Cult of the Presidency, to worry about a political culture dominated by

the mythology that presidents are paternal, virtually omnipotent figures who will protect us from harm and, in the broadest sense, ensure that justice is done.  Americans, in turn, crave protection from a messianic commander-in-chief, and are willing to vest him with great latitude and power in exchange for that protection.

This mystical conception of the presidency--and the power-concentrating dynamic it leads to--is the major theme of my book, especially Chapter 7, "Omnipotence and Impotence":

In the BBC production of Robert Graves’ “I Claudius,” Emperor Augustus tells his wife Livia that the Senate had voted to make him a god in the Syrian city of Palmyra, and the people there had put a statue of him in the temple, to which they’d bring offerings in the hopes that the emperor would grant rain or cure their ailments. “Tell me Livia,” Augustus says, “If I’m a god, even in Palmyra, how do I cure gout?”

Augustus’s frustration is all-too-familiar to the modern president. He can no more “manage” the economy or provide seamless protection from all manner of hazards than Augustus could bring rain or cure gout.

Neither Varadarajan nor Greenwald is particularly ready to feel sorry for a president who's done everything he can to stoke irrational public expectations for presidential salvation in virtually every public policy area.  Nor am I.  It couldn't happen to a nicer guy, as they say.

But it's not entirely clear what Carville, Palin et al actually want done.  A government takeover of the spill site?  That's a stupid idea.  Better regulation (retroactively?)?  There's plenty of blame to go around, but color me unsurprised that incompetence and regulatory capture characterize the Minerals Management Service, and that a president who sits atop an 2-million-employee executive branch, pretending to run it, didn't  "fix" those problems beforehand. 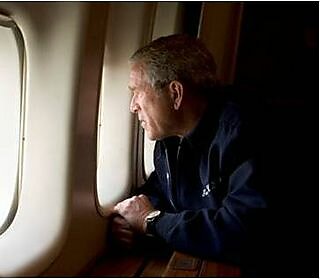 President Bush Surveys the Scene in His Superplane[/caption]

If the story LA Gov. Bobby Jindal is telling is true (I don't know enough to say), then he has a legitimate beef with the federal government for standing in the way of state mitigation efforts. But most of the complaints dominating the airwaves are far vaguer: centering on the atavistic notion that just by Obama traveling to the site, the magical force of Presidential Concern might cause the slick to recede.   Yesterday, Drudge linked to Obama's schedule thusly:

Things Obama Is Doing Instead of Going to Gulf: Duke Photo, Lunch with Bill, Vacation...

Schadenfreude is fun, but it's worth worrying about the consequences of this view of the presidency.  When the public views the president as the man responsible for curing everything that ails us--from bad weather, to private-sector negligence--presidents are going to seek powers to match those superheroic responsibilities.  With Great Responsibility Comes Great Power (to torture one superhero slogan).

That was what happened in Katrina's aftermath, as I explain here--and don't be surprised if it's the upshot of the public and the pols' current cries for presidential rescue.

In yesterday's Post, E.J. Dionne complained that we've "handed vast responsibilities over to a private sector that will never see protecting the public interest as its primary task.”  But as far as incentives go, the spill is all downside for BP, which is hemorrhaging market value along with oil.  In contrast, the federal government and the president may well emerge from the spill with less popularity, but more power. That's the logical consequence of the public's boundless conception of presidential responsibility.

If only we could "Top Kill" the Cult.