Do the Rich Avoid Taxes?

President Obama says the rich should pay higher tax rates, citing billionaire Warren Buffett, who says he pays a lower tax rate than his secretary. Various analysts have pointed out that Buffett takes very little salary and gets most of his income in the form of dividends and capital gains, which reflect income that was already taxed once at the corporate level. But what about the broader argument, that the rich don’t pay enough in taxes, that maybe they even pay less than the middle class?

Upper‐​income taxpayers have paid a growing share of the federal tax burden over the last 25 years.


A 2008 study by the Organization for Economic Cooperation and Development, for example, found that the highest‐​earning 10% of the U.S. population paid the largest share among 24 countries examined, even after adjusting for their relatively higher incomes. “Taxation is most progressively distributed in the United States,” the OECD study concluded.


Meanwhile, the percentage of U.S. households paying no federal income tax has been climbing, and reached 51% for 2009, according to a new analysis by the Joint Committee on Taxation.

An accompanying graphic shows the growing share of income taxes paid by the wealthy (in green) and how the U.S. ratio of taxes on the wealthy in relation to their income compares to that in other rich countries: 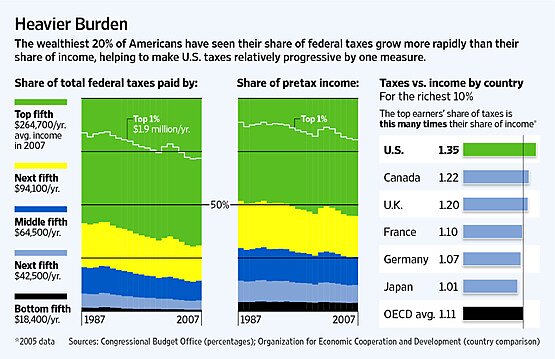