Is the problem with Baltimore's district schools a lack of funds?

The Daily Show's Jon Stewart argued as much during a recent interview with ABC's George Stephanopoulos:

“If we are spending a trillion dollars to rebuild Afghanistan’s schools, we can’t, you know, put a little taste Baltimore’s way. It’s crazy.”

Let’s forget the off-the-cuff comparison to Afghanistan, however, and focus on a more relevant comparison. Is it true, as Stewart suggests, that Baltimore schools are underfunded relative to other American schools? The National Center for Education Statistics reports the following data on Baltimore City Public Schools and Fairfax County Public Schools, the latter considered among the best school districts in the entire country:

Baltimore schools spend 27% more than Fairfax County schools per student and a majority of the money comes not from the city but from the state and federal government. Thus, when it comes to education spending, Baltimore has not been ignored but is a recipient of significant federal and state aid.

Clearly, as Tabarrok shows, Baltimore's schools are not lacking for funds. According to the most recent NCES data, the national average district school per-pupil expenditure was about $12,000 in 2010-11, which is about $12,500 in 2015 dollars.

However, one could object to Tabarrok's comparison: perhaps it's simply more expensive to educate low-income students in Baltimore than the generally well-off students in Fairfax County. To see if money really makes a difference, we would need an apples-to-apples comparison.

One way to test the "more money equals better results" assumption is to examine the funding changes across different states to see if there is any correlation between increased funding and improved results. In 2012, researchers from Harvard, Stanford, and the University of Munich released a report on international and state trends in student achievement that addressed this very question, finding that “Just about as many high-spending states showed relatively small gains as showed large ones…. And many states defied the theory [that spending drives performance] by showing gains even when they did not commit much in the way of additional resources.” They concluded:

It is true that on average, an additional $1,000 in per-pupil spending is associated with an annual gain in achievement of one-tenth of 1 percent of a standard deviation. But that trivial amount is of no statistical or substantive significance. 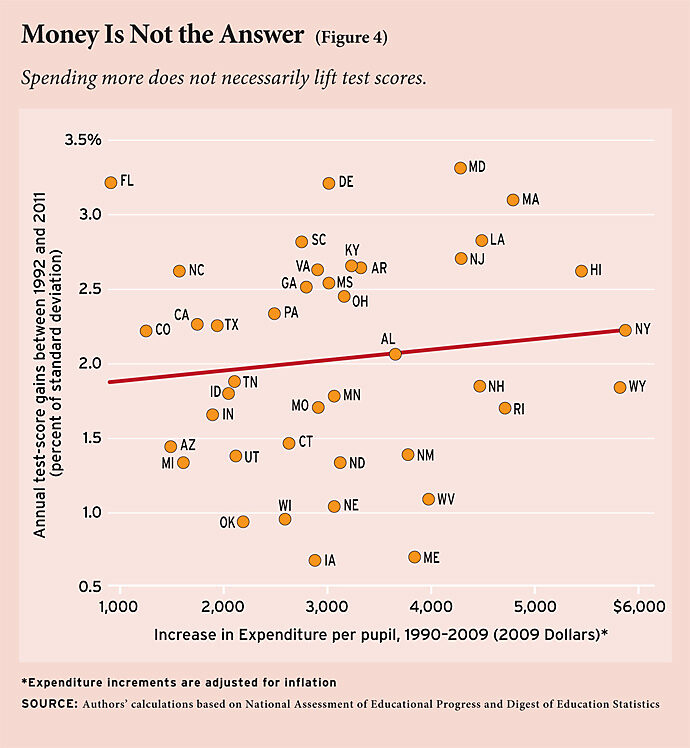 In other words, there's no good reason to believe that Baltimore's district schools would improve if the government followed Stewart's advice and gave them a lot more money. In fact, the federal government already tried that. Due to stimulus funds, federal spending on Baltimore city schools increased from about $143 million in 2009 to a high of $265 million in 2011, before declining to about $150 million in 2014.

So how did Baltimore city school students perform on the state's standardized test over that time period? About the same, and perhaps slightly worse: 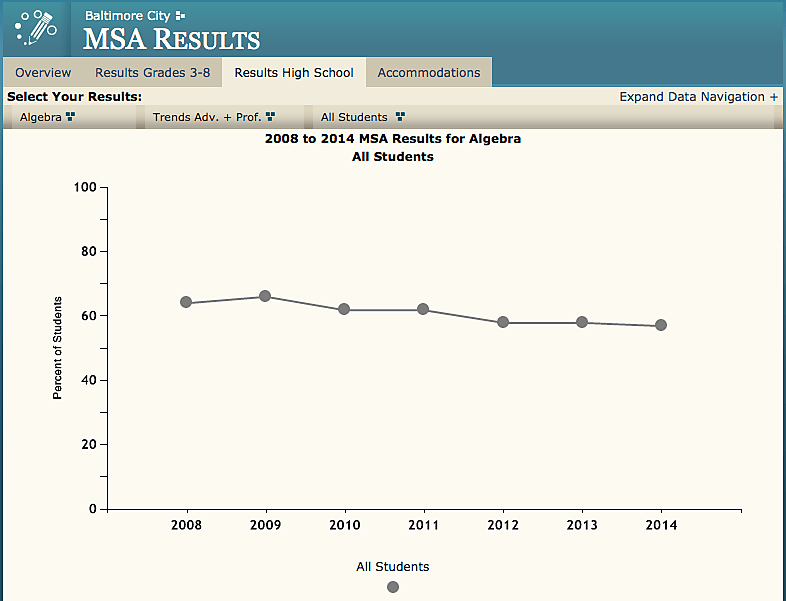 Nearby Washington, D.C. already spends significantly more on its district schools. According to the most recent U.S. Census Bureau data, the D.C. district schools spent $1.2 billion in FY2012 [Table 1] on 44,618 students [Table 19], or about $26,660 per pupil. That's down from the nearly $30,000 spent per pupil in FY2010, yet D.C.'s district schools still rank among the worst in the nation. By contrast, the D.C. Opportunity Scholarship Program spends less than one third as much per pupil yet, according to a random-assignment study by the U.S. Department of Education, it produces slightly better academic results and a significantly higher graduation rate (82 percent for students offered a voucher, compared to 70 percent in the control group). Other gold standard studies on school choice programs have found a positive impact on student achievement as well.

What Baltimore needs is not more money, but more choice.