Dishonest British Budgeting…Just Like We Do It in America

According to news coverage, United Kingdom Prime Minister Cameron is imposing deep and savage budget cuts. I was interviewed by the BBC recently, for instance, and asked whether 25 percent spending reductions were too harsh. And here’s an excerpt from a New York Times story that is very representative of the news coverage.

Like a shipwrecked sailor on a starvation diet, the new British coalition government is preparing to shrink down to its bare bones as it cuts expenditures by $130 billion over the next five years and drastically scales back its responsibilities. The result, said the Institute for Fiscal Studies, a research group, will be “the longest, deepest sustained period of cuts to public services spending” since World War II. …Public‐​sector unions are planning a series of strikes. Charities — which Mr. Cameron has said should take over some of the responsibilities now held by the state — say that they are at risk of collapse because they are so dependent on government money. And the chief executive of the Supreme Court, the country’s highest, said she did not know whether the court would be able to function at all if its budget were cut by 40 percent.

To be blunt, this type of analysis is completely false. There are no budget cuts in the United Kingdom, at least in terms of total government spending. Instead, the politicians are measuring cuts against some imaginary baseline, which is the same scam that happens in Washington. So if spending increases by 4 percent instead of 7 percent, that is characterized as a 3 percent budget reduction. The chart shows what is happening with overall government spending in the United Kingdom. Notwithstanding phony stories about budget cuts, spending in Prime Minister Cameron’s first year is climbing by more than 4 percent — twice as fast as needed to keep pace with inflation. 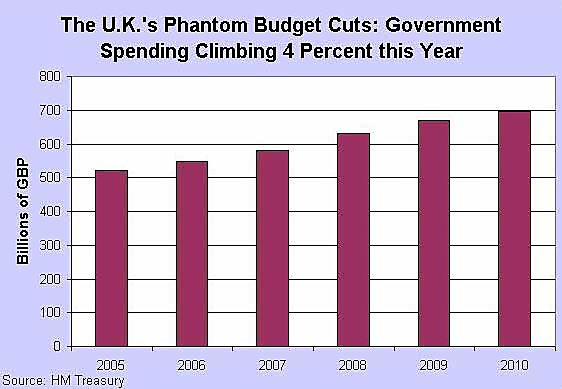 This doesn’t mean that Cameron isn’t doing anything right. There is a two‐​year pay freeze for bureaucrats, for instance, which is at least a small step in the right direction. But the Tory‐​Liberal Democrat coalition is not a good role model for those who want limited government and fiscal responsibility. There are promises of spending restraint in future years, but those belong in the I’ll-believe-it-when-I-see-it category. Spending is supposed to increase by less than 1 percent in next year’s budget, for instance, but politicians are very good with tough talk of fiscal discipline in future years. But if we judge them by what they’re doing today rather than what they’re claiming will happen in the future, Cameron’s policies leave much to be desired.


The tax side of the fiscal equation is even more depressing. There is small reduction in the corporate tax rate, but otherwise there is considerable bad news. The new government is leaving in place the new 50 percent top tax rate imposed by Gordon Brown as an election‐​year class‐​warfare gimmick. It is boosting the capital gains tax rate from 18 percent to 28 percent. And it increased the VAT rate from 17.5 percent to 20 percent.