The title of a New York Times editorial claims that “A Big Storm Requires Big Government.” The Times implies that when confronted with a major natural disaster like Hurricane Sandy, Americans would be screwed if they didn't have bureaucrats from the Federal Emergency Management Agency (FEMA) to “to decide where rescuers should go, where drinking water should be shipped, and how to assist hospitals that have to evacuate.”

(Gee, I had no idea that it was government planners who directed my local Wegmans to ramp up shipments of bottled water to meet the demand of people rushing to stock up on H2O.)

One would think that the Times might have been more restrained in casting as our savior the same outfit that responded to Hurricane Katrina with trailers contaminated with formaldehyde. Nope. According to the Times, it’s crazy to think that the “financially strapped states” could handle disaster relief. “Who would make decisions about where to send federal aid?” the Times asks. “Or perhaps there would be no federal aid, and every state would bear the burden of billions of dollars in damages.”

Why shouldn't the states be responsible for paying for disaster response? The last time I checked, the federal government was also financially strapped. Regardless of which level of government assumes the responsibility of paying for it, the money ultimately comes from taxpayers. Under the current arrangement, taxpayers in, say, Arizona will pay for disaster recovery in Pennsylvania. Is it really more absurd to expect the citizens of Pennsylvania to pay for their own disaster response than people living in, say, the Rockies? Here’s another crazy thought: maybe Pennsylvanians would have more of an incentive to scrutinize the effectiveness and efficiency of relief efforts in their state if they were footing the bill?

A 2006 Cato study written by economists Russell Sobel and Peter Leeson argues that the federal government’s top-down disaster system is “fundamentally flawed.” Bureaucratic red tape and the inherent inability of federal officials to effectively coordinate the delivery of supplies can stymie relief efforts. State and local officials are naturally closest to those affected and thus better appreciate the needs of their communities. However, federal red tape can impede the ability of those on the frontlines to effectively deliver assistance. Take, for example, FEMA’s interference with the delivery of relief supplies to hospitals during Katrina:

The Red Cross “begged to be allowed to go [into New Orleans]” to distribute essential relief supplies but was prevented by government officials from doing so. FEMA confiscated critical emergency supplies, shipped by the hospital’s out-of-state private owner to assist the hospital’s 137 remaining patients, while the supplies were in transit to Methodist Hospital in New Orleans. “Those supplies were in fact taken from us by FEMA, and we were unable to get them to the hospital,” one hospital representative remarked. To avoid FEMA’s confiscatory actions, the owner sent a second shipment to Lafayette (130 miles from New Orleans) and had a private helicopter fly it directly to the rooftop of the hospital in New Orleans.

Sobel and Leeson recount numerous examples of FEMA’s inability to coordinate the delivery of relief assistance. Here’s another:

Perhaps the most stunning example of how a centralized federal bureaucracy is inherently ill-equipped to coordinate the direction of relief resources is what has become known as the “odyssey of the ice.” FEMA ordered 182 million pounds of ice to be delivered to stranded families and aid workers. Yet some of the ice ended up in Portland, Maine, more than 1,500 miles away from the disaster area. The cost of shipping and storing the 200-plus truckloads of the Portland-bound ice was $275,000...

A truckload of ice even ended up at the Reid Park Zoo in Tucson, Arizona. The driver of the ice truck got so many conflicting commands from government relief officials that he ended up traveling through 22 states without ever delivering a single bag of ice to a hurricane victim. Instead, he ended up donating it to the Tucson zoo to be enjoyed by the polar bears.

Of course, anytime federal policymakers have the green light to spend other people’s money, politics invariably come into play. The President is responsible for declaring that a disaster qualifies for federal aid. According to Sobel and Leeson, recent presidents issue the most “major disaster” declarations when it is reelection time:

After examining all disasters from 1991 to 1999, a comprehensive study by Garrett and Sobel found that states politically important to the president in his reelection bid have a significantly higher rate of disaster declaration. Recent data confirm the continuation of this political manipulation. In 1996, when Bill Clinton was up for reelection, he set a record by declaring the largest number of major disasters in history: 75. Unsurprisingly, the second-highest year for disasters in history was 2004, George W. Bush’s reelection year, when he declared 68. Ninety percent of the increase in disasters declared between 2003 (a nonelection year) and 2004 were in the 12 battleground states where the election was decided by 5 percent or less.

The year with the largest number of disasters declared during George H. W. Bush’s administration was also the year he was up for reelection, and this holds true for Ronald Reagan as well. Other striking individual examples abound, including a two-foot snowstorm in Ohio (a state that went for Bush), which netted that state disaster relief during the 2004 election year, while Wisconsin (a state that went for Kerry) was denied disaster relief in 2005 in the aftermath of a major tornado.

The authors also note that “For every representative a state has on the House disaster relief oversight committee, it receives about $30 million in additional funding when a disaster is declared. All told, the [Garret and Sobel] study found that nearly half of all disaster relief is motivated by politics rather than by need.”

Finally, Sobel and Leeson point out that “The vast majority of disasters declared are for rain, snow, and other mundane weather events.” Indeed, the following chart shows that the total number of federal disaster declarations has substantially increased since the mid-1990s. 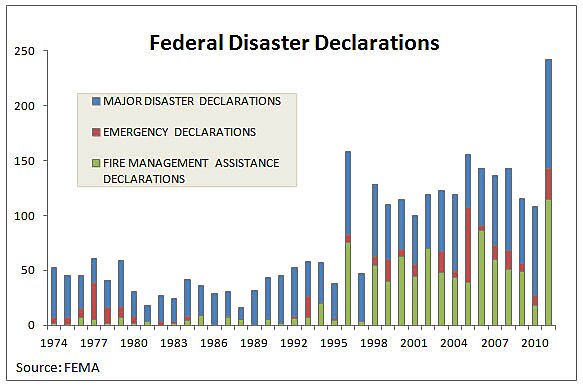 What has happened is that disaster assistance has become effectively nationalized. So for all of the Times’ whimpering about cutting FEMA’s budget, the real problem is that the federal government has (once again) overstepped its boundaries. But just as is the case with all federal aid to lower levels of government, the receiving state and local politicians are only too happy to take the “free” federal money instead of having to ask their constituents to come up with it.