Did Public Schooling Fail Us? 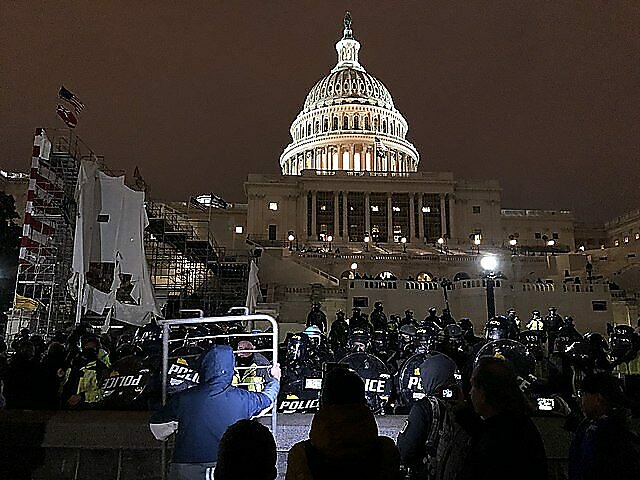 Could public schools have prevented the disgraceful, riotous attack on the U.S. Capitol?

The question seems crazy. The mob, or at least a sizeable portion of it, was outraged and apparently convinced that our system of government had gone off the rails. That it had cheated them. How could public schools have done anything to stop that?

It would, of course, be wildly unfair to blame public schooling for the breakdown of social cohesion and civic norms we saw on display at the Capitol. Except for one thing: Public schooling was largely created on the promise that it would prevent such breakdowns, a promise that continues to be wielded against alternatives such as charter schools or private school vouchers. We are told that public schooling is the “cornerstone” or “bedrock” of American democracy, and anything departing from it would cause unity and rule by the people to crumble.

The notion that “common” schooling is crucial to democracy has some illustrious early propagators. Thomas Jefferson – generally not a proponent of energetic government – was perhaps the most famous Founder to champion public schooling, calling for a basic, publicly funded schooling system in Virginia. He wrote in 1786, “I think by far the most important bill in our whole code is that for the diffusion of knowledge among the people. No other sure foundation can be devised for the preservation of freedom, and happiness.” He was not alone in this belief, with John Adams and others also asserting the importance of widespread education delivered, at least partially, by public schools.

Despite the enthusiasm for public schooling among some founding luminaries, little was established in their lifetimes. This was likely because most people simply did not believe that government should provide schools, and education was already widespread. Historian Albert Fishlow estimates that by 1840 – before much public schooling – more than 90 percent of white adult Americans were literate. (African Americans were often barred by government from being educated.) And while the early United States was far from perfectly democratic – in most states only white males who owned property, paid taxes, or had served in the military could vote – the nascent country was nonetheless advanced compared to the rest of the world when it came to rule by the people.

The person most prominently associated with the birth and eventual dominance of public schooling is Horace Mann, the 19th century Massachusetts reformer known as the “Father of the Common Schools.” His crusade for public schooling began in 1837 when he became the first secretary of the newly formed Massachusetts State Board of Education. The need to create virtuous, dedicated citizens was his top selling point. As he declared in 1848, “Never will wisdom preside in the halls of legislation, and its profound utterances be recorded on the pages of the statute‐​book, until common schools—or some other agency of equal power not yet discovered—shall create a more far‐​seeing intelligence, and a purer morality, than has ever existed among communities of men.”

It took several decades after Mann’s crusade to solidify public schooling as the educational norm, but it eventually came to dominate. The earliest, readily available data we have on where children have gone to school dates back to 1889, and they consistently show roughly 90 percent of students attending public schools. We also see more children spending increasing amounts of time in school as time passes: from about 65 percent of 5 to 17‐​year‐​olds spending roughly 78 days in school in 1869, to more than 94 percent spending 167 days today.

Public schooling has been triumphant. Yet we are a cleaved society with an increasingly weak commitment to democratic norms such as political tolerance and rule of law.

The Capitol riot seems like prima facie evidence of a dissolution of social cohesion and democratic values, especially coming off years of highly contentious elections, demonstrations against police brutality that sometimes spun off destruction, “cancel culture,” and more. Deeper analyses back up this seemingly obvious state of affairs. These include non‐​negligible support for unilateral presidential rule or even a military coup under certain conditions; findings of markedly increased demonization of members of opposing political parties since the late 1960s; partisan affiliations being seen as legitimate negative factors to use in hiring decisions; declining trust in numerous American institutions, including government; and declining generalized trust, with the share of General Social Survey respondents agreeing that “most people can be trusted” dropping from 46 percent in 1972 to 21 percent in 2018.

Clearly, widespread public schooling has not prevented the decay of social cohesion and democratic norms. Probably because it never had the power to do so. The education system cannot force people to like one another or democracy, nor can it maintain those things if people turn against them. Democratically controlled schooling is more likely to reflect decrepit attitudes than change them.

That said, the system does not appear to do a good job with what it can directly impact.

According to the most recent National Assessment of Educational Progress civics and history exams – federal tests given to nationally representative samples of students – only 23 percent of public school 8th graders were proficient in civics, meaning they were able do such things as “explain two ways Congress fulfills a constitutional responsibility” and “identify the purpose of a country’s constitution.” In U.S. history, only 14 percent were proficient, including the ability to do such things as “identify a right guaranteed by the Bill of Rights.”

What about bringing diverse people together?

The first reality that has long rendered public schools poor builders of bridges among disparate groups is that children tend to be assigned to schools based on their home addresses and, for reasons tied to both law and human nature, people tend to live with others who are similar—racially, economically, culturally—to themselves. When students do attend schools with diverse populations, they tend to be in separated classrooms and social groups.

An inherent inability to create physical togetherness is just part of the public schooling cohesion‐​building problem. By trying to encompass diverse people, public schooling ends up fostering political and social conflicts which, by their adversarial nature, are more likely to have polarizing than unifying effects. Public schooling forces diverse people to fight over whose values, history, or preferred policies the schools will uphold.

This is not just theoretical. Cato’s Public Schooling Battle Map catalogues over 2,400 values and identity‐​based conflicts collected since 2005, including about 350 at the state level, leaving no state citizens outside the battleground. In just the last year we have seen conflicts over students’ rights to express support for Donald Trump versus the rights of others to calm, orderly instruction; rights of teachers to champion Black Lives Matter against students’ rights to not be captive to an authority figure’s political speech; battles over classic but sometimes offensive reading assignments; and much more. And, of course, there has been a furious national debate over the New York Times’s 1619 Project, including its use in schools, which prompted a Trump‐​led drive to advance “patriotic” interpretations of U.S. history.

This inherent tendency to force conflict may be a major reason that public schooling does a poor job of shaping citizens. It likely renders a lot of civics topics, or encouraging civically engaged behaviors, too hot to handle. Imagine discussing impeachment, or encouraging protesting, in many schools today. As Louise Dubé, executive director of the civics education group iCivics, said about handling the contentious 2016 presidential campaign, “Teachers right now are afraid to teach the election.”

That parents freely choose private schools may well be one reason they appear to do a better job shaping citizens than public. Private schools can teach more rigorous, concrete civics because painful conflict is less of a danger to avoid. Rather than families being forced to fight against teachings they find unacceptable, they can simply leave. And most families likely would not choose schools with teachings they found intolerable to being with.

The only private school scores the National Assessment of Educational Progress publishes are for Roman Catholic schools, which constitute the largest single group of private K-12 institutions. They perform much better than public schools. In civics, 41 percent of Catholic school 8th graders were proficient, as were 29 percent in U.S. history. These results certainly leave room for improvement, but they are roughly double the public school proficiency rates. This despite Catholic schools for a long time having been considered by many people to be the un‐​American arch‐​nemeses of public schools.

Catholic school scores could, importantly, reflect characteristics of the students and families that choose them more than what the schools themselves do. Though relatively low cost – their tuition is around $8,000, versus the roughly $15,000 per‐​student spent in public schools – Catholic schools still must charge tuition, and hence likely have better‐​off students on average than public schools. That said, numerous studies have controlled statistically for student backgrounds, and have typically found superior private school performance. As University of Arkansas professor Patrick Wolf itemizes in School Choice Myths: Setting the Record Straight on Education Freedom, the most methodologically rigorous studies have produced 27 findings on civic outcomes, with 14 showing a private school advantage, 12 no difference, and only 1 a public school advantage.

Freedom wards off divisive conflict and enables private schools to teach rigorous curricula. It also enables them to have distinctive identities and cultures that render them better able to build bridges among diverse people. A school’s distinctive ethos, whether it be Christian values, high academics, an arts focus, or more, immediately gives students who may be from, say, different racial backgrounds, foundations to build new, shared identities.

Research supporting this is limited, but private schools overall have been found to have more peaceful, racially harmonious climates than public schools, while more focused studies have found greater voluntary mixing of students and intergroup friendships at private than public schools.

Of course, while superior to public schooling, even universal school choice would be no panacea for polarization or disintegrating democratic norms. If large shares of people have highly divergent political views, or strong desires to separate, neither school choice nor public schooling can make them change. Again, education is much more likely to reflect widespread beliefs than to alter them. Which is why the failure to create unified, small‐​d democrats nationwide cannot be laid at the feet of the public schools. But that failure also puts the lie to the assertion that public schooling is a guarantor of a unified, democratic society, and therefore sacrosanct. Indeed, the evidence points to school choice as the best means within education to foster a unified, civically healthy country.