A Diatom’s Response to Three Levels of CO2

Phaeodactylum tricornutum is a marine diatom that is also a potential alternative energy source due to its high growth rates and lipid (fat) content, the latter of which – according to Wikipedia  – constitutes about 20 to 30 percent of total dry cell weight under standard culture conditions. Given as much, this species is of interest to scientists, such as the seven‐​member research team of Wu et al. (2015), who recently conducted an experiment to determine how this potential biofuel responds to different levels of atmospheric CO2. More specifically, the group of Chinese researchers studied the response of P. tricornutum to three levels of CO2 (150, 350 and 1500 parts per million (ppm)) over a period of seven days.


For comparative purposes, a CO2 concentration of 150ppm is around the threshold value required to sustain plant growth on this earth. We came perilously close to this at the nadir of the last ice age. 350ppm is the concentration from a quarter‐​century ago (we’re around 400ppm now) and 1500ppm is quite a bit higher than even the most optimistic forecasts can get it to around 2100.


And what did they learn? As shown in the figure below, diatom growth rates rose with the level of CO2 treatment. The growth at 350 and 1500 ppm treatments were approximately 70 and 192 percent greater than that observed in the lowest CO2 treatment (150 ppm). And those values may be conservative, given that growth rates at the two higher CO2 concentrations appear to still be rising at the end of the experiment on day 7 (i.e., the green and red lines have not peaked). Similar trends were seen in culture dry weights, where the mean dry weight values reported for the medium and high CO2 treatments were 31 percent and 195 percent greater than in the low CO2 treatment. Lastly, lipid content, expressed as a percent of dry cell weight, amounted to 33, 36 and 54 percent in the 150, 350 and 1500 ppm treatments, respectively. 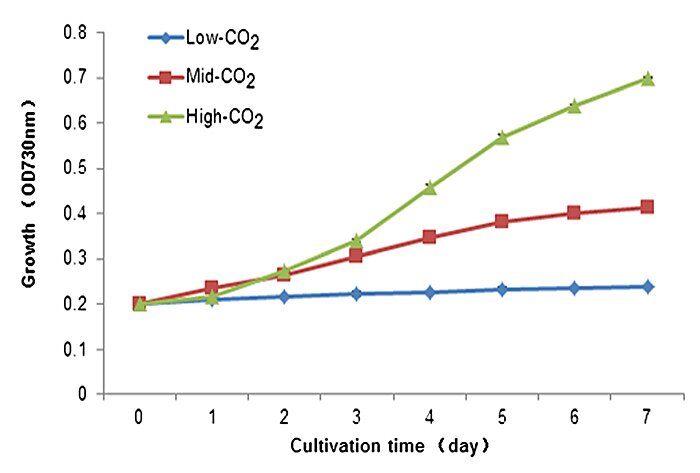 In discussing their findings, Wu et al. note their results are “consistent with numerous previous studies that higher levels of CO2 support higher growth rates.” And, they further demonstrate the possible viability of using P. tricornutum as a biofuel, which many persons today consider an added benefit.