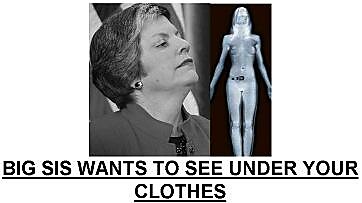 The Drudge Report’s provocative banner this afternoon combines with other news to suggest a homeland security trend: sneakin’ a peek.


The other story is the question whether the nominee to head the Transportation Security Admnistration violated federal privacy laws as an FBI agent, then omitted key information in reporting it to Congress. Robert O’Harrow of the Washington Post (returning to the privacy beat!) reports that Erroll Southers, a former FBI agent, made inconsistent statements to Congress about wrongly accessing confidential criminal records about his estranged wife’s new boyfriend. (More here.)


That was 20 years ago. Being fully transparent about it today would almost certainly have prevented it from being disqualifying. But over the last 20 years, data collection has grown massively, and federal access to personal data has grown — including access by the TSA. Data about the appearance of your naked body may be on the very near horizon.


Southers’ problem with sneaking a peek at confidential records — and whatever cover‐​up or oversight in his reporting of it to Congress — signal precisely the wrong thing at a time when people rightly want their security not to be the undoing of privacy.