Democrats, Republicans, and the Upward March of Government Spending

Writing about the meeting between President Obama and congressional leaders -- where some hoped to find some agreement on taxes and spending issues -- Dana Milbank quotes two skeptics:

"There's a reason why we have Democrats and Republicans," incoming House speaker John Boehner said at his news conference. "We believe in different things."

"We have two parties for a reason," Obama said a few minutes later. "There are real philosophical differences."

No doubt there are. But it's hard to find the differences on this chart of the upward march of government spending, handily provided by the Heritage Foundation: 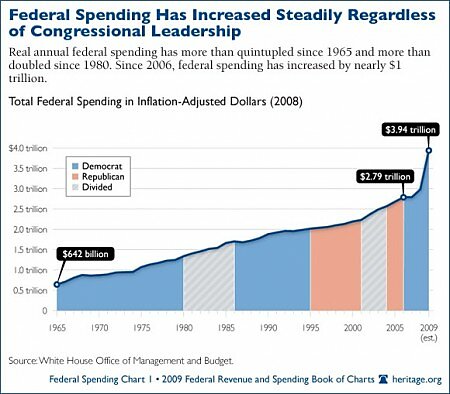 To the naked eye, it looks like a pretty steady climb through the Johnson-Nixon-Ford-Carter-Reagan-Bush-Clinton years, with a bit of acceleration under Bush II and then a sharp jump in 2008 and 2009. Heritage's color-coding refers to Congress only, so you can't see that the slight slowdown in the Clinton years occurred under divided government. And of course the TARP and other 2008 spending was proposed and forced through by the Republican White House, even though Congress was indeed Democratic at the time.

But the bottom line is: If we have two parties for a reason, because they believe in different things, why don't we see some real differences in the growth of federal spending?