Deficits and Inflation, from the Fed to the Cartoon Page

You know you’ve arrived when your name starts showing up in cartoons. Here’s the Wall Street Journal’s legendary “Pepper … and Salt” cartoon from last Thursday: 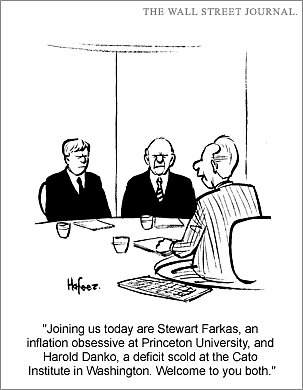 Of course, most inflation obsessives are deficit scolds, so it’s not clear that host is going to get much debate.


One person who might be called both an inflation obsessive — that is, a person who objects to the robbery of savers through the erosion of the value of their money — and a deficit scold is David Stockman, former budget director for President Ronald Reagan. He has a new book out, The Great Deformation: The Corruption of Capitalism in America, which he summarized in the New York Times on Sunday. He’ll be speaking about his book at the Cato Institute on Wednesday. Don’t miss it.