I caught a lot of flack from my Republican friends for my post blaming the FY2009 deficit on Bush instead of Obama. Well, I must be a glutton for punishment because I can't resist jumping (albeit reluctantly) to Obama's defense again. I'm venting my spleen for two reason. First, FoxNews.com posted a story headlined "Obama Shatters Spending Record for First-Year Presidents" and noted that:

President Obama has shattered the budget record for first-year presidents -- spending nearly double what his predecessor did when he came into office and far exceeding the first-year tabs for any other U.S. president in history. In fiscal 2009 the federal government spent $3.52 trillion ...That fiscal year covered the last three-and-a-half months of George W. Bush's term and the first eight-and-a-half months of Obama's.

This story was featured on the Drudge Report, so it has received a lot of attention. Second, Bush's former Senior Adviser wrote a column for the Wall Street Journal eviscerating Obama for big budget deficits. Given Bush's track record, this took considerable chutzpah, but what really nauseated me was this passage:

When Mr. Obama was sworn into office the federal deficit for this year stood at $422 billion. At the end of October, it stood at $1.42 trillion.

I'm a big fan of criticizing Obama's profligacy, but it is inaccurate and/or dishonest to blame him for Bush's mistakes. At the risk of repeating my earlier post, the 2009 fiscal year began on October 1, 2008, and the vast majority of the spending for that year was the result of Bush Administration policies. Yes, Obama did add to the waste with the so-called stimulus, the omnibus appropriation, the CHIP bill, and the cash-for-clunkers nonsense, but as the chart illustrates, these boondoggles only amounted to just a tiny percentage of the FY2009 total -- about $140 billion out of a $3.5 trillion budget. 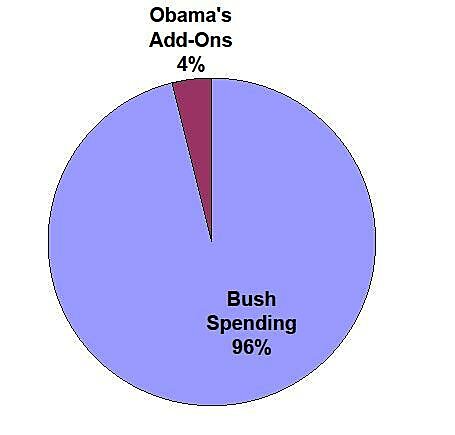 There are some subjective aspects to this estimate, to be sure. Supplemental defense spending could boost Obama's share by another $25 billion, but Bush surely would have asked for at least that much extra spending, so I didn't count that money but individual readers can adjust the number if they wish. Also, Obama used some bailout money for the car companies, but I did not count that as a net increase in spending since the bailout funds were approved under Bush and I strongly suspect the previous Administration also would have funneled money to GM and Chrysler. In any event, I did not give Obama credit for the substantial amount of TARP funds that were repaid after January 20, so the net effect of all the judgment calls certainly is not to Bush's disadvantage.

Let's use an analogy. Obama's FY2009 performance is like a relief pitcher who enters a game in the fourth inning trailing 19-0 and allows another run to score. The extra run is nothing to cheer about, of course, but fans should be far more angry with the starting pitcher. That having been said, Obama since that point has been serving up meatballs to the special interests in Washington, so his earned run average may actually wind up being worse than his predecessor's. He promised change, but it appears that Obama wants to be Bush on steroids.