Writing for the New York Times, Paul Krugman has a new column promoting more government spending and additional government regulation. That’s a dog‐​bites‐​man revelation and hardly noteworthy, of course, but in this case he takes a swipe at the Cato Institute.

The financial crisis of 2008 and its painful aftermath…were a huge slap in the face for free‐​market fundamentalists. …analysts at right‐​wing think tanks like…the Cato Institute…insisted that deregulated financial markets were doing just fine, and dismissed warnings about a housing bubble as liberal whining. Then the nonexistent bubble burst, and the financial system proved dangerously fragile; only huge government bailouts prevented a total collapse.

Upon reading this, my first reaction was a perverse form of admiration. After all, Krugman explicitly advocated for a housing bubble back in 2002, so it takes a lot of chutzpah to attack other people for the consequences of that bubble.


But let’s set that aside and examine the accusation that folks at Cato had a Pollyanna view of monetary and regulatory policy. In other words, did Cato think that “deregulated markets were doing just fine”?


Hardly. If Krugman had bothered to spend even five minutes perusing the Cato website, he would have found hundreds of items by scholars such as Steve Hanke, Gerald O’Driscoll, Bert Ely, and others about misguided government regulatory and monetary policy. He could have perused the remarks of speakers at Cato’s annual monetary conferences. He could have looked at issues of the Cato Journal. Or our biennial Handbooks on Policy.


The tiniest bit of due diligence would have revealed that Cato was not a fan of Federal Reserve policy and we did not think that financial markets were deregulated. Indeed, Cato scholars last decade were relentlessly critical of monetary policy, Fannie Mae, Freddie Mac, Community Reinvestment Act, and other forms of government intervention.


Heck, I imagine that Krugman would have accused Cato of relentless and foolish pessimism had he reviewed our work in 2006 or 2007.


I will confess that Cato people didn’t predict when the bubble would peak and when it would burst. If we had that type of knowledge, we’d all be billionaires. But since Krugman is still generating income by writing columns and doing appearances, I think it’s safe to assume that he didn’t have any special ability to time the market either.


Krugman also implies that Cato is guilty of historical revisionism.

…many on the right have chosen to rewrite history. Back then, they thought things were great, and their only complaint was that the government was getting in the way of even more mortgage lending; now they claim that government policies, somehow dictated by liberals even though the G.O.P. controlled both Congress and the White House, were promoting excessive borrowing and causing all the problems.

I’ve already pointed out that Cato was critical of government intervention before and during the bubble, so we obviously did not want government tilting the playing field in favor of home mortgages.


And that’s just the tip of the iceberg. The burden of government spending almost doubled during the Bush years, the federal government accumulated more power, and the regulatory state expanded. No wonder economic freedom contracted under Bush after expanding under Clinton.


But I’m digressing. Let’s return to Krugman’s screed. He doesn’t single out Cato, but presumably he has us in mind when he criticizes those who reject Keynesian stimulus theory.

…right‐​wing economic analysts insisted that deficit spending would destroy jobs, because government borrowing would divert funds that would otherwise have gone into business investment, and also insisted that this borrowing would send interest rates soaring. The right thing, they claimed, was to balance the budget, even in a depressed economy.

Actually, I hope he’s not thinking about us. We argue for a smaller burden of government spending, not a balanced budget. And we haven’t made any assertions about higher interest rates. We instead point out that excessive government spending undermines growth by undermining incentives for productive behavior and misallocating labor and capital.


But we are critics of Keynesianism for reasons I explain in this video. And if you look at current economic performance, it’s certainly difficult to make the argument that Obama’s so‐​called stimulus was a success. 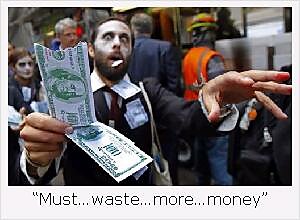 But Krugman will argue that the government should have squandered even more money. Heck, he even asserted that the 9–11 attacks were a form of stimulus and has argued that it would be pro‐​growth if we faced the threat of an alien invasion.


In closing, I will agree with Krugman that there’s too much “zombie” economics in Washington. But I’ll let readers decide who’s guilty of mindlessly staggering in the wrong direction.