The following chart looks at total projected federal spending according to the Congressional Budget Office's adjusted March baseline and its score of the debt deal. The chart only considers the reduction in outlays resulting from the deal's cap on discretionary spending, which the CBO says will save $917 billion over the next ten years.  It does not consider the $1.2-$1.5 trillion in future "deficit reduction" that Dan Mitchell discusses here. 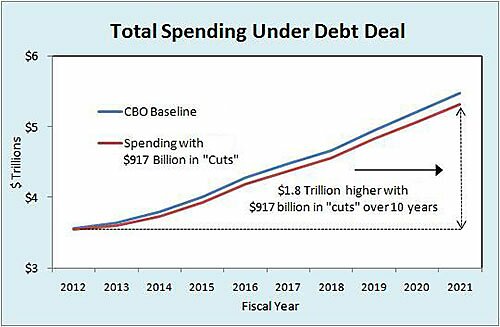 Excluding outlays for the wars in Afghanistan and Iraq, which are unlikely to materialize, total spending over the next ten years would be about $43 trillion under the discretionary spending caps instead of $44 trillion. In other words, even if Congress holds to the caps -- and even if the "deficit reduction" targets established in the bill are achieved -- the federal government's spending binge will continue. If this is a "win" for the limited government crowd, I'd hate to see what the Beltway establishment would consider a "loss."