The Debt Ceiling and the Balanced Budget Amendment

A balanced‐​budget amendment would deprive policymakers of the flexibility they need to address national security and economic emergencies.

A fair point. Statesmen should have the ability to “address national security and economic emergencies.” But the same day’s paper included this graphic on the growth of the national debt: 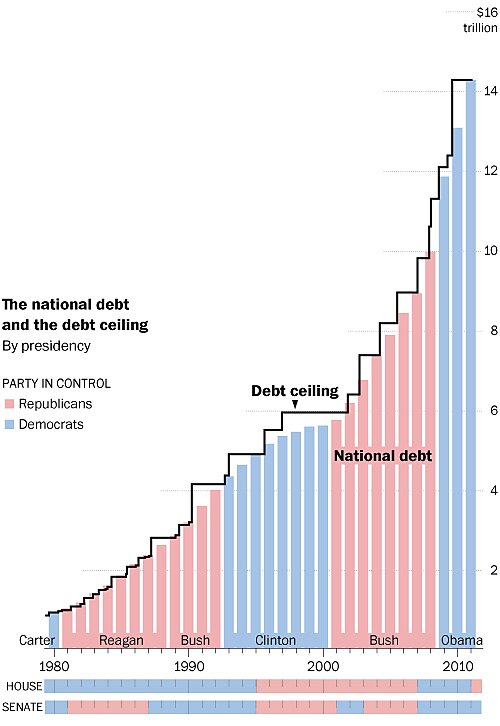 Does this look like the record of policymakers making sensible decisions, running surpluses in good year and deficits when they have to “address national security and economic emergencies”? Of course not. Once Keynesianism gave policymakers permission to run deficits, they spent with abandon year after year. And that’s why it makes sense to impose rules on them, even rules that leave less flexibility than would be ideal if you had ideal statesmen. Indeed, the debt ceiling itself should be that kind of rule, one that limits the amount of debt policymakers can run up. But it has obviously failed.


We’ve become so used to these stunning, incomprehensible, unfathomable levels of deficits and debt — and to the once‐​rare concept of trillions of dollars — that we forget how new all this debt is. In 1980, after 190 years of federal spending, the national debt was “only” $1 trillion. Now, just 30 years later, it’s sailing past $14 trillion.


Historian John Steele Gordon points out how unnecessary our situation is:

There have always been two reasons for adding to the national debt. One is to fight wars. The second is to counteract recessions. But while the national debt in 1982 was 35% of GDP, after a quarter century of nearly uninterrupted economic growth and the end of the Cold War the debt‐​to‐​GDP ratio has more than doubled.


It is hard to escape the idea that this happened only because Democrats and Republicans alike never said no to any significant interest group. Despite a genuine economic emergency, the stimulus bill is more about dispensing goodies to Democratic interest groups than stimulating the economy. Even Sen. Charles Schumer (D., N.Y.) — no deficit hawk when his party is in the majority — called it “porky.”

Annual federal spending rose by a trillion dollars when Republicans controlled the government from 2001 to 2007. It has risen another trillion during the Bush‐​Obama response to the financial crisis. So spending every year is now twice what it was when Bill Clinton left office. Republicans and Democrats alike should be able to find wasteful, extravagant, and unnecessary programs to cut back or eliminate. They could find some of them here in this report by Chris Edwards.


In the Kentucky Resolutions, Thomas Jefferson wrote, “In questions of power, then, let no more be heard of confidence in man, but bind him down from mischief by the chains of the Constitution.” Just so. When it becomes clear that Congress as a body cannot be trusted with the management of the public fisc, then bind them down with the chains of the Constitution, even — or especially — chains that deny them the flexibility they have heretofore abused.