Considering that every economic theory agrees that living standards and worker compensation are closely correlated with the amount of capital in an economy (this picture is a compelling illustration of the relationship), one would think that politicians - particularly those who say they want to improve wages - would be very anxious not to create tax penalties on saving and investment.

Yet the United States imposes very harsh tax burdens on capital formation, largely thanks to multiple layers of tax on income that is saved and invested.

But we compound the damage with very high tax rates, including the highest corporate tax burden in the developed world.

And the double taxation of dividends and capital gains is nearly the worst in the world (and will get even worse if Obama's class-warfare proposals are approved).

To make matters worse, the United States also has one of the most onerous death taxes in the world. As you can see from this chart prepared by the Joint Economic Committee, it is more punitive than places such as Greece, France, and Venezuela. 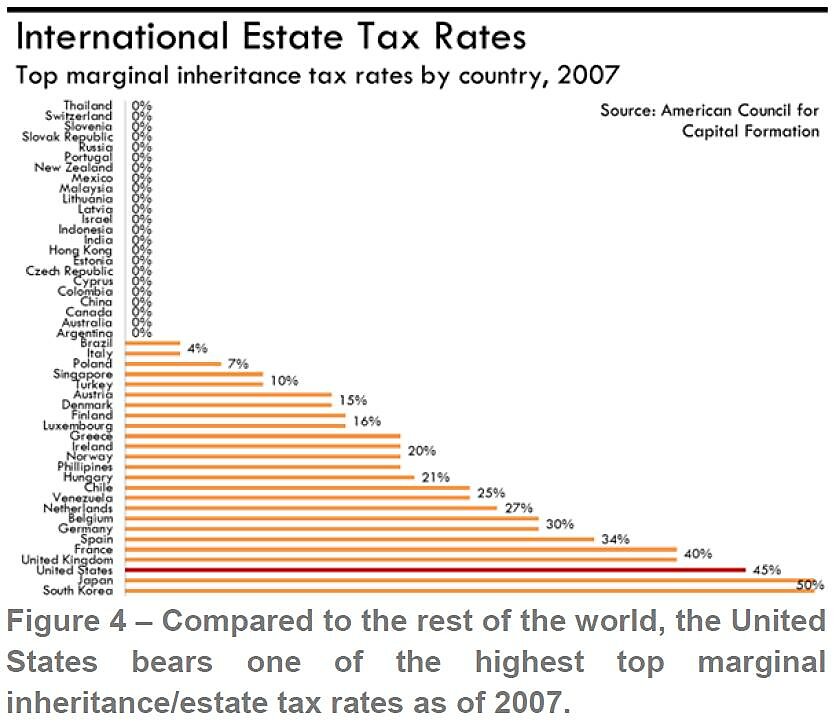 Who would have ever thought that Russia would have the correct death tax rate, while the United States would have one of the world's worst systems?

Fortunately, not all U.S. tax policies are this bad. Our taxation of labor income is generally not as bad as other industrialized nations. And the burden of government spending in the United States tends to be lower than European nations (though both Bush and Obama have undermined that advantage).

And if you look at broad measures of economic freedom, America tends to be in - or near - the top 10 (though that's more a reflection of how bad other nations are).

But these mitigating factors don't change the fact that the U.S. needlessly punishes saving and investment, and workers are the biggest victims. So let's junk the internal revenue code and adopt a simple and fair flat tax.