When Ronald Reagan said that big government undermined the economy, some people dismissed his comments because of his philosophical belief in liberty.

And when I discuss my work on the economic impact of government spending, I often get the same reaction.

This is why it's important that a growing number of establishment outfits are slowly but surely coming around to the same point of view.

This is remarkable. It's beginning to look like the entire world has figured out that there's an inverse relationship between big government and economic performance.

That's an exaggeration, of course. There are still holdouts pushing for more statism in Pyongyang, Paris, Havana, and parts of Washington, DC.

But maybe they'll be convinced by new research from the World Bank, which just produced a major report on the outlook for Europe. In chapter 7, the authors explain some of the ways that big government can undermine prosperity.

There are good reasons to suspect that big government is bad for growth. Taxation is perhaps the most obvious (Bergh and Henrekson 2010). Governments have to tax the private sector in order to spend, but taxes distort the allocation of resources in the economy. Producers and consumers change their behavior to reduce their tax payments. Hence certain activities that would have taken place without taxes, do not. Workers may work fewer hours, moderate their career plans, or show less interest in acquiring new skills. Enterprises may scale down production, reduce investments, or turn down opportunities to innovate. ...Over time, big governments can also create sclerotic bureaucracies that crowd out private sector employment and lead to a dependency on public transfers and public wages. The larger the group of people reliant on public wages or benefits, the stronger the political demand for public programs and the higher the excess burden of taxes. Slowing the economy, such a trend could increase the share of the population relying on government transfers, leading to a vicious cycle (Alesina and Wacziarg 1998). Large public administrations can also give rise to organized interest groups keener on exploiting their powers for their own benefit rather than facilitating a prosperous private sector (Olson 1982).

In other words, government spending undermines growth, and the damage is magnified by a poorly designed tax policies.

The authors then put forth a theoretical hypothesis.

...economic models argue that the excess burden of tax increases disproportionately with the tax rate—in fact, roughly proportional to its tax rate squared (Auerbach 1985). Likewise, the scope for self-interested bureaucracies becomes larger as the government channels more resources. At the same time, the core functions of government, such as enforcing property rights, rule of law and economic openness, can be accomplished by small governments. All this suggests that as government gets bigger, it becomes more likely that the negative impact of government might dominate its positive impact. Ultimately, this issue has to be settled empirically. So what do the data say?

These are important insights, showing that class-warfare tax increases are especially destructive and that government spending undermines growth unless the public sector is limited to core functions.

Then the authors report their results.

Figure 7.9 groups annual observations in four categories according to the share of government spending in GDP during that year. Both samples show a negative relationship between government size and growth, though the reduction in growth as government 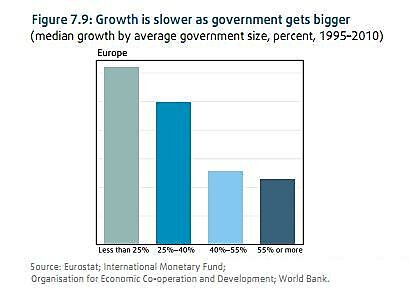 becomes bigger is far more pronounced in Europe, particularly when government size exceeds 40 percent of GDP. ...we provide new econometric evidence on the impact of government size on growth using a panel of advanced and emerging economies since 1995. As estimates can be biased due to problems of omitted variables, endogeneity, or measurement errors, it is necessary to rely on a broad range of estimators. ...They suggest that a 10 percentage point increase in initial government spending as a share of GDP in Europe is associated with a reduction in annual real per capita GDP growth of around 0.6–0.9 percentage points a year (table A7.2). The estimates are roughly in line with those from panel regressions on advanced economies in the EU15 and OECD countries for periods from 1960 or 1970 to 1995 or 2005 (Bergh and Henrekson 2010 and 2011).

These results aren't good news for Europe, but they also are a warning sign for the United States. The burden of government spending has jumped by about 8-percentage points of GDP since Bill Clinton left office, so this could be the explanation for why growth in America is so sluggish.

Last but not least, they report that social welfare spending does the most damage.

The last point in this passage needs to be emphasized. It is redistribution spending that does the greatest damage. In other words, it's almost as if Obama (and his counterparts in places such as France and Greece) are trying to do the greatest possible damage to the economy.

In reality, of course, these politicians are simply trying to buy votes. But they need to understand that this shallow behavior imposes very high costs in terms of foregone growth.

To elaborate, this video discusses the Rahn Curve, which augments the data in the World Bank study.

But since government in the United States is now consuming more than 40 percent of GDP (about as much as Spain!), the first priority is to figure out some way of moving back in the right direction by restraining government so it grows slower than the private sector.