Daniel in the Looter’s Den: My Adventures at the UN

I was at the United Nations yesterday for something called “The High Level Thematic Debate on the State of the World Economy.”

Most speakers, including the secretary general of the United Nations, the president of the European Commission, Paul Volcker, and Joseph Stiglitz, to varying degrees blamed private markets for the fiscal and financial problems of the world. Not surprisingly, there also was a consensus for more government---usually wrapped up in buzzwords such as “sustainable development” and “equitable growth” and "coolective action”

I spoke in the afternoon as part of a roundtable on the economic crisis (see full schedule here). There were five speakers on my panel, including yours truly. Here are my thoughts on what the others said.

Dr. Supachai Panitchpakdi, secretary-general of the United Nations Conference on Trade and Development, must have been part of the buzz-word contest I mentioned yesterday. Lots of rhetoric that theoretically was inoffensive, but I had the feeling that it translated into a call for more government. But maybe I’m paranoid, so who knows.

Professor Dato’ Dr. Zaleha Kamaruddin, rector of the International Islamic University of Malaysia, was an interesting mix. At some points, she sounded like Ron Paul, saying nice things about the gold standard and low tax rates. But she also called for debt forgiveness and other forms of intervention. She explicitly said she was providing Islamic insights, so perhaps the strange mix makes sense from that perspective.

Former U.S. senator Alan K. Simpson also was a mixed bag. Simpson was co-chair of President Obama’s fiscal commission, which I thought was a disappointment because it endorsed higher taxes and urged subpar entitlement changes rather than much-needed structural reforms. He also went after Grover Norquist because of the no-tax pledge, which I think is a valuable tool to keep Republicans from selling out for bigger government. All that being said, Senator Simpson is a promoter of smaller government and he wants lower tax rates. So while I disagree with some of his tactical decisions, he was an ally on the panel and would probably do a pretty good job if he was economic czar. 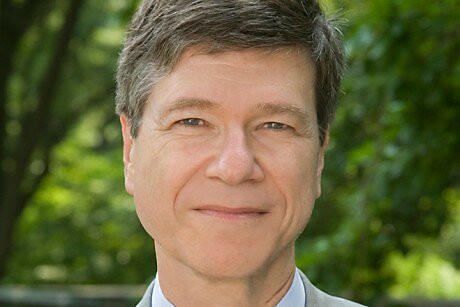 Last but not least, Professor Jeffrey Sachs of Columbia University was a statist, as one would expect based on what I wrote about him last year. We clashed the most, arguing about everything from tax havens to the size of government. Interestingly, we both said nice things about Sweden, but I was focusing on policies such as school choice and pension reform, while he admired the large public sector. But I will admit he was a nice guy. We sat next to each other and did find a bit of common ground in that we both were sympathetic to the way Sweden dealt with its financial crisis about 20 years ago (a version of the FDIC-resolution approach rather than the corrupt TARP bailout approach).

But at least the United Nations was willing to have contrary voices, unlike the Organization for Economic Cooperation and Development, which once threatened to cancel a Global Tax Forum because of my short-lived participation.