Cutting Government Spending in a Recession


Cato Senior Fellow Jim Powell notes that President Warren G. Harding inherited from his predecessor Woodrow Wilson “a post–World War I depression that was almost as severe, from peak to trough, as the Great Contraction from 1929 to 1933 that FDR would later inherit.”


However, instead of calling for bigger government to right the economy, as President Obama did upon inheriting George Bush’s mess, Harding pushed for spending and tax cuts.

With Harding’s tax and spending cuts and relatively non‐​interventionist economic policy, GNP rebounded to $74.1 billion in 1922. The number of unemployed fell to 2.8 million— a reported 6.7 percent of the labor force— in 1922. So, just a year and a half after Harding became president, the Roaring Twenties were underway. The unemployment rate continued to decline, reaching an extraordinary low of 1.8 percent in 1926. Since then, the unemployment rate has been lower only once in wartime (1944), and never in peacetime.

The following chart shows federal spending from 1920 to 1940: 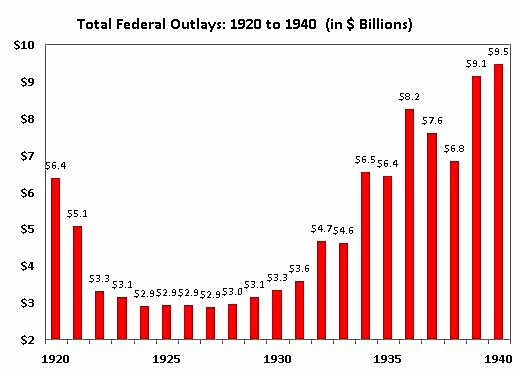