In this Current Wisdom we report further on our ongoing effort to prepare comments on the latest, greatest (or, more aptly, most recent, most indecent) edition of the government’s assessment of climate change impacts in the United States (if you are interested in submitting your own comments, you should hurry, because the public comment period closes on this Friday, April 12).

A disturbing yet ubiquitous aspect of the current draft National Climate Assessment (and for that matter, both earlier editions of the NCA) is the use of future projections of climate change before demonstrating that they work in the recent past, as greenhouse-gas concentrations have increased.

Discussions of future impacts from changes in precipitation resulting from human emissions of greenhouse gases are everywhere in the report and they are usually bad—increased droughts, floods, and longer dry spells, for example.  The NCA folks weren’t quite so enthusiastic at generating many forecasts of salutary changes.  Perhaps Dr. Pangloss is their spiritual adviser.

NCA’s precipitation forecasts turn out to be uglier than Candide’s fair Cunegonde became.  Do  the models accurately simulate past changes that have been observed? If the answer is “no,” then the whole impact exercise is meaningless because the models provide no reliable information about what the future may bring.

While Zhang et al. (2007) concluded globally that they had detected an anthropogenic influence on the overall latitudinal patterns of precipitation trends (that is, the climate model trends were of the same sign as the observed trends), in the latitude band that includes the majority of the United States population a mismatch between model projections and precipitation trends was found (Figure 1). In that band, the climate models predicted a downward trend in precipitation, while observations show an upwards trend. 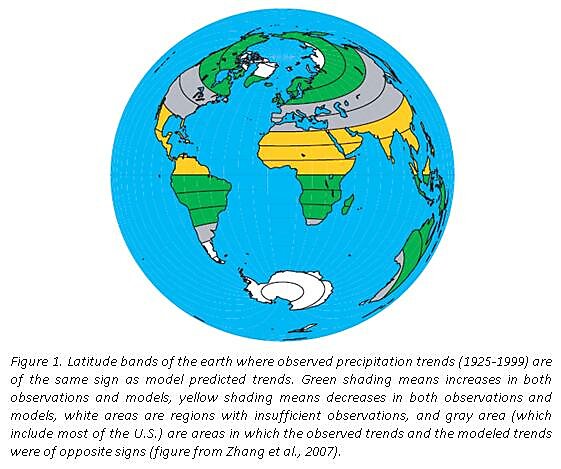 More recently, Beena Sarojini and colleagues (2012) examined the performance of a new (and supposedly improved) crop of climate models  and found much the same as Zhang et al. (2007). 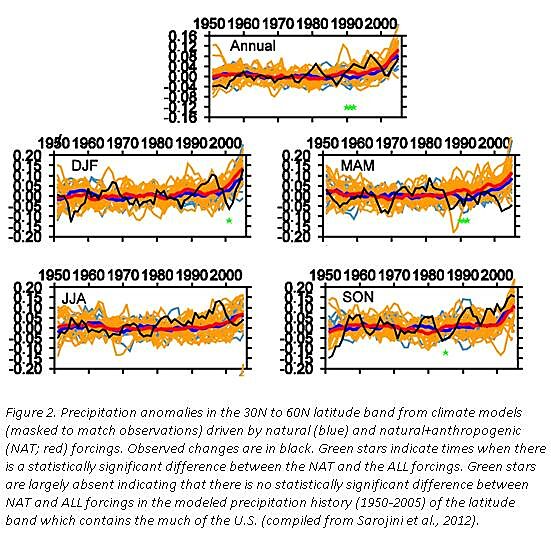 Obviously, climate models whose hindcasts differ in sign from what is observed (Zhang et al., 2007), or which indicate that human influences are indistinguishable from natural changes (Sarojini et al., 2012) possess no skill in identifying a human-induced climate signal on observed precipitation across the U.S. and therefore should not be used to make future projections.

And while Zhang et al. (2007) and Sarojini et al. (2012) looked only at the match within latitude bands, just-published research by a team led by Debbie Polson ( 2013) showed more specific results.

Across the U.S., Polson et al. (2013) find that for most of the country during all seasons, that the sign of the observed precipitation changes (since 1950) differs from the sign of the climate model projected changes (Figure 3). 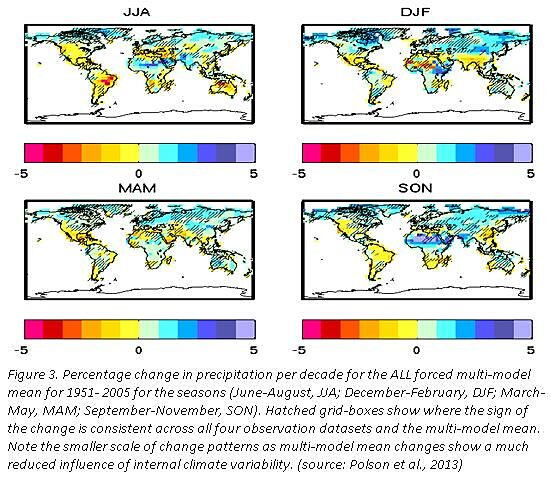 We are beginning to sound like a broken record here, but again, it is impossible to present reliable future projections for precipitations changes across the U.S. (seasonal or annual) from a collection of climate models which largely cannot even get the sign (much less the magnitude) of the observed changes correct.

Here is our recommendation to the NCA author team:

Or as the late Johnnie Cochran so simply put it, “if [the glove] doesn’t fit, you must acquit.”