The Current Wisdom is a series of occasional articles in which Patrick J. Michaels and Paul C. “Chip” Knappenberger, from Cato’s Center for the Study of Science, review interesting items on global warming in the scientific literature or of a more technical nature. These items may not have received the media attention that they deserved or have been misinterpreted in the popular press.

We hardly need a high tech fly-swatter (although they are fun and effective) to kill this nuisance—it’s so languorous that one can just put their thumb over it and squish.

Jeb Bush’s candidacy? No, rather the purported connection between human-caused global warming and the highly-publicized spread of the Zika virus.

According to a recent headline in The Guardian (big surprise) “Climate change may have helped spread Zika virus, according to WHO scientists.”

Here are a few salient passages from The Guardian article:

“Zika is the kind of thing we’ve been ranting about for 20 years,” said Daniel Brooks, a biologist at University of Nebraska-Lincoln. “We should’ve anticipated it. Whenever the planet has faced a major climate change event, man-made or not, species have moved around and their pathogens have come into contact with species with no resistance.”

“We know that warmer and wetter conditions facilitate the transmission of mosquito-borne diseases so it’s plausible that climate conditions have added the spread of Zika,” said Dr. Diarmid Campbell-Lendrum, a lead scientist on climate change at WHO.

Is it really “plausible?”

The Zika virus is transmitted by two species of mosquitoes, Aedes aegypti and Aedes albopictus, that are now widespread in tropical and sub-tropical regions of the globe (including the Southeastern U.S.), although they haven’t always been.

These mosquito species, respectively, have their origins in the jungles of Africa and Asia—where they largely remained for countless thousands of years. It’s hypothesized that Aedes aegypti found its way out of Africa during the slave trade, which brought the mosquitoes into the New World, and from there they spread throughout the tropics and subtropics of North and South America. Aedes albopictus, also known as the Asian tiger mosquito, is a more recent global traveler, spreading out from the forests of Southeast Asia to the rest of the world during the 1980s thanks to the interconnectedness of the modern transportation network. Figure 1 below shows the modeled geographic distribution of each of these species. 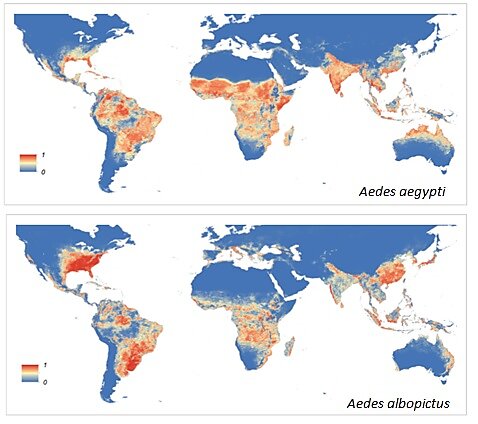 The distribution explosion from confined forests to the global tropics and subtropics had nothing whatsoever to do with climate change, rather, it was due to the introduction of the mosquito species into favorable existing climates.

Since the Aedes mosquitoes are now widely present in many areas also highly populated by the human species, the possibility exists for outbreaks and the rapid spread of any of the diseases that the mosquitoes may carry, including dengue fever, yellow fever, chikungunya, West Nile and Zika.

But what about climate change? It’s got to make things better for warmth-loving mosquitos and the diseases they spread, right? After all, we read that in the New York Times!

Hardly. Climate change acts at the periphery of the large extant climate-limited distributions. And its impact on those margins is anything but straightforward.

Many scientific studies have used various types of climate and ecological niche modelling to try to project how Aedes mosquito populations and geographic range may change under global warming and they all project a mixed bag of outcomes. The models project range/population expansions in some areas, and range/population contractions in others—with the specific details varying among the different studies. The one take-home message from all of these studies is that the interaction between mosquitos and climate and disease, is, in a word, complex.

For example, here are some typical results (from Khormi and Kumar, 2014) showing the current distribution of Aedes aegypti mosquitos along with the projected distribution in the latter part of this century under a pretty much business-as-usual climate change scenario. 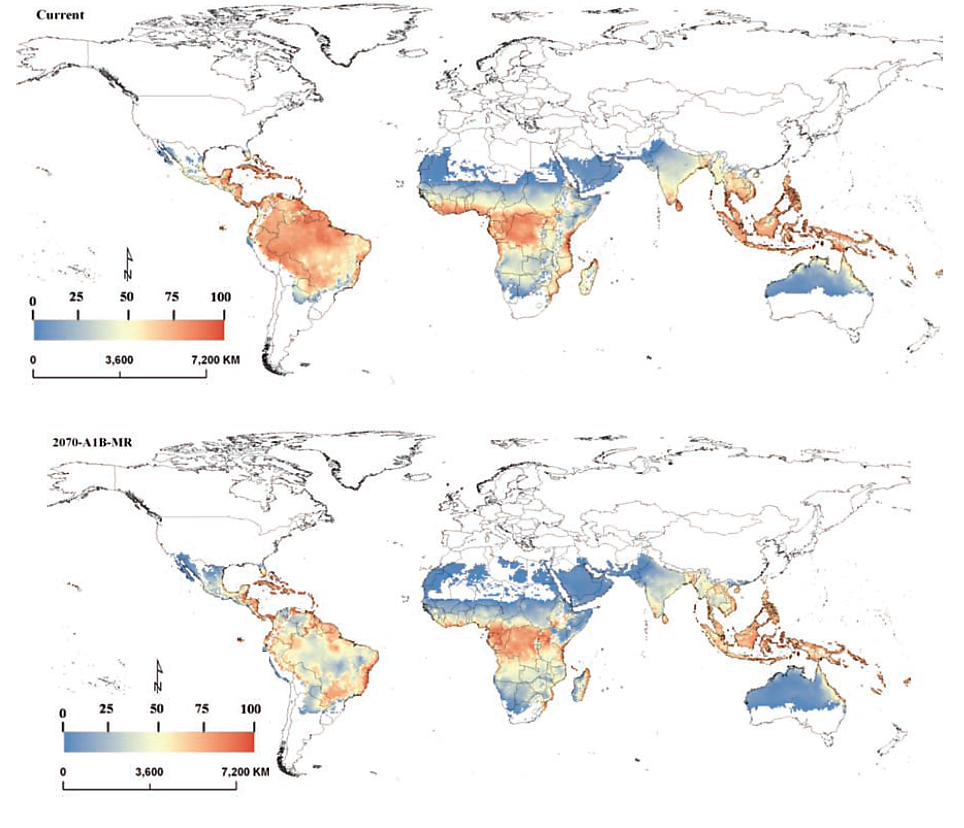 Good luck seeing much of a difference. Which is our point: the bulk of the large distribution of Aedes aegypti remains the same now as 50 years from now, with small changes (of varying sign) taking place at the edges. Similar results have been reported for Aedes albopictus by Yiannis Proestos and colleagues. The authors of the Aedes aegypti study write:

Surprisingly, the overall result of the modelling reported here indicates an overall contraction in the climatically suitable area for Aedes in the future… The situation is not straightforward but rather complicated as some areas will see an upsurge in transmission, while others are likely to see a decline. [emphasis added]

The human response to the presence of the mosquitos and the disease is equally complicated, if not more so.

As Dr. Paul Reiter pointed out in his 2001 classic “Climate Change and Mosquito-Borne Disease”:

[T]he histories of three such diseases—malaria, yellow fever, and dengue—reveal that climate has rarely been the principal determinant of their prevalence or range; human activities and their impact on local ecology have generally been much more signiﬁcant.

More recently, Christofer Aström and colleagues found this to be the case in their modelling efforts for dengue fever (a similar result would be expected for Zika, carried by the same mosquitos). They report:

The bottom line is that even 50-100 years from now, under scenarios of continued global warming, the changes to the Aedes populations are extremely difficult to detect and make up an exceedingly small portion of the extant distributions and range. The impact of those changes is further complicated by the interactions of the mosquitos, humans, and disease—interactions which can be mitigated with a modicum of prevention.

Linking climate change to the current mosquito range and outbreak of Zika (or any other of your favorite Aedes-borne diseases)?  No can do.

The threat of the spread of vector-borne diseases, like most every other horror purported to be brought about by climate change, is greatly overblown. The scientific literature shows the impact, if any, to be ill-defined and minor. As such, it is many times more effectively addressed by directed, local measures, than by attempting to alter the future course of the earth’s climate through restrictions on greenhouse gas emissions (produced from the burning of fossil fuels to generate power)—the success and outcome  of which is itself uncertain.