The Current Wisdom is a series of monthly articles in which Patrick J. Michaels, director of the Center for the Study of Science, reviews interesting items on global warming in the scientific literature that may not have received the media attention that they deserved, or have been misinterpreted in the popular press. Occasionally — as in this edition — we examine recent global warming perceptions that are at odds with reality.

The notion that people just can’t adapt to change (and therefore that governments must regulate change) is known as “Dumb People Syndrome” (DPS).  Given the fact that the planet is “habitable” (meaning  that there large numbers of people) over a mean annual temperature range of approximately 40°C , Gore’s statement—which is about a few degrees C, at best—is quintessential DPS.

DPS has its subtypes, such as “Dumb Farmer Syndrome”, in which there’s agricultural Armageddon as the world’s farmers fail to adapt to warming conditions.  It’s not only preposterous, it’s inconsistent with history.

Farmers aren’t dumb, and there are incentives for their supply chain—breeders, chemical manufacturers, equipment companies, etc.—to produce adaptive technologies.  Corn is already much more water-use efficient than it was, thanks to changes in genetics, tillage practices, and farm equipment.  The history of U.S. crop yield bears strong witness (Figure 1). 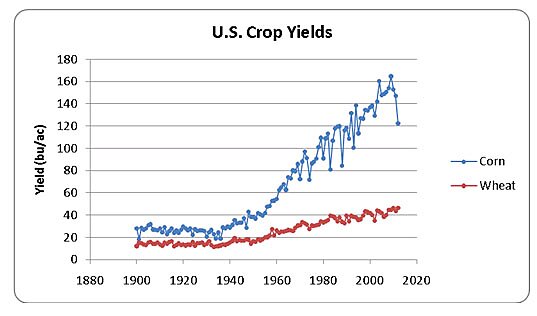 A look at the horrible crop year of 2012 is instructive. Corn yield drops about 38 bushels per acre  from what’s known as the “technological trend line.”  Because the “expected” yield—thanks to  technology—with good weather is so high (around 160 bushels/acre), that’s a drop of about 24%, which is simply unremarkable when compared to the other lousy weather years of 1901 (36%), 1947 (21%), 1983 (29%) and 1988 (30%).  Did we mention that the direct fertilization effect of atmospheric CO2  has resulted in a  corn yield increase of approximately seven per cent?

Most assessments of the impacts of climate change give some credence to DPS. Below is one of the  “Key Findings” from the report Global Climate Change Impacts in the United States produced by the U.S. Climate Change Global Change Research Program (USGCRP), which was used as a major support for  the U.S. Environmental Protections Agency’s “Endangerment Finding”  that human carbon dioxide emissions are a threat to health and welfare. According to the USGCRP:

Crop and livestock production will be increasingly challenged.

Now compare that to the corresponding “Key Finding” from our report Addendum: Global Climate Change Impacts in the United States which is an independent (from the USGCRP) assessment of the scientific literature relating to environmental changes and how they may impact U.S. agriculture:

Crop and livestock production will adapt to climate change.

There is a large body of evidence that demonstrates substantial untapped adaptability of U.S. agriculture to climate change, including crop-switching that can change the species used for livestock feed. In addition, carbon dioxide itself is likely increasing crop yields and will continue to do so in increasing increments in the future.

Another example of the DPS relates to projections of the effects  of more or stronger  heat waves on human mortality.  Everyone has heard—especially after last summer—how human use of fossil fuels to produce energy will increase the frequency and severity of killer heat waves.

Here is how the USGCRP sees it, according to the “Key Messages” from the “Human Health” chapter of their report:

Increases in the risk of illness and death related to extreme heat and heat waves are very likely.

Why? Because people are not dumb. Instead of dying in increasing numbers as temperatures rise, people take better precautions to protect themselves from the heat.

Numerous examples of this abound, including some pioneering work that we did on the subject about 10 years ago.  We clearly demonstrated that across the U.S., people were becoming less sensitive to high temperatures, despite the fact that high temperatures were increasing. In other words, adaptation was taking place in the face of (or, perhaps even because of) rising temperatures. Adaptations include expanding use of air conditioning, increasing public awareness, and more widespread community action programs.

What was interesting  about our work is we didn’t even need global warming to drive increasing heat waves.  All we needed was economic activity that concentrates in cities.  As they grow, buildings and pavement retain the heat of the day and impede the flow of ventilating winds.  In recent years, the elevation of night temperatures here in Washington (where your tax dollars virtually guarantee economic growth),  compared to the countryside, has become truly remarkable.  But you won’t find  an increase in heat-related mortality.  Instead, there’s been a decrease.
Our research was limited to major cities across the United States. But similar findings have since been reported for other regions of the world, the most recent being the from the Czech Republic.

Czech researchers Jan Kyselý and Eva Plavcová recently published the results of their investigation of changes in heat-related impacts there from 1986 through 2009.  What they found sure wasn’t surprising to us, but surely must come as quite a shock to the fans of DPS.

Declining trends in the mortality impacts are found in spite of rising temperature trends. The finding remains unchanged if possible confounding effects of within-season acclimatization to heat and the mortality displacement effect are taken into account. Recent positive socioeconomic development, following the collapse of communism in Central and Eastern Europe in 1989, and better public awareness of heat-related risks are likely the primary causes of the declining vulnerability. The results suggest that climate change may have relatively little influence on heat-related deaths, since changes in other factors that affect vulnerability of the population are dominant instead of temperature trends. It is essential to better understand the observed nonstationarity of the temperature-mortality relationship and the role of adaptation and its limits, both physiological and technological, and to address associated uncertainties in studies dealing with climate change projections of temperature-related mortality.

Findings like these, along with our own work, caused us to conclude in our Addendum report that:

Evidence is much more compelling in  support of a “smart people” diagnosis than its opposite.  In fact, if humankind was really as dumb as the fans of DPS would have us believe, we wouldn’t be around  today to hear their doomsaying, because Homo sapiens would have been wiped out during vastly larger environmental swings (in and out of ice ages, for example) in our past,  than those expected as a consequence of the burning of fossil fuels to produce the energy that powers our world—a world in which the human life expectancy, perhaps the best measure of our level of “dumbness” or “smartness”—has more than doubled over the last century and continues to grow ever longer.

Simply put, we are not “dumb” when it comes to our survival and our ability to adapt to changing environmental conditions, but “scientific” assessments that assume otherwise most certainly are.