The Current Climate of Extremes

What a day yesterday! First, our National Oceanic and Atmospheric Administration (NOAA) announced that 2015 was the warmest year in the thermometric, and then the Washington Post’s Jason Samenow published an op‐​ed titled “Global warming in 2015 made weather more extreme and it’s likely to get worse.”


Let’s put NOAA’s claim in perspective. According to Samenow, 2015 just didn’t break the previous 2014 record, it “smashed” (by 0.16°C). But 2015 is the height of a very large El Niño, a quasi‐​periodic warming of tropical Pacific waters that is known to kite global average surface temperature for a year or so. The last big one was in 1998. It, too set the then‐​record for warmest surface temperature, and it was (0.12°C) above the previous year, which, like 2014, was the standing record at the time.


So what happened in 2015 is what is supposed to happen when an El Niño is superimposed upon a warm period or at the end year of a modest warming trend. If it wasn’t a record‐​smasher, there would have to be some extraneous reason why, such as a big volcano (which is why 1983 wasn’t more of a record‐​setter).


El Niño warms up surface temperatures, but the excess heat takes 3 to 6 months or so to diffuse into the middle troposphere, around 16,000 feet up. Consequently it won’t fully appear in the satellite or weather balloon data, which record temperatures in that layer, until this year. So a peek at the satellite (and weather balloon data from the same layer) will show 1) just how much of 2015’s warmth is because of El Niño, and 2) just how bad the match is between what we’re observing and the temperatures predicted by the current (failing) family of global climate models.


On December 8, University of Alabama’s John Christy showed just that comparison to the Senate Subcommittee on Space, Science, and Competitiveness. It included data through November, so it was a pretty valid record for 2015 (Figure 1). 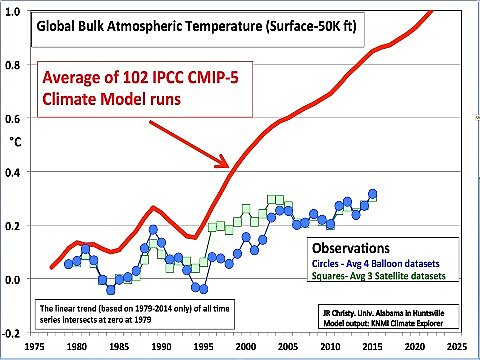 
El Niño’s warmth occurs because it suppresses the massive upwelling of cold water that usually occurs along South America’s equatorial coast. When it goes away, there’s a surfeit of cold water that comes to the surface, and global average temperatures drop. 1999’s surface temperature readings were 0.19°C below 1998’s. In other words, the cooling, called La Niña, was larger than the El Niño warming the year before. This is often the case.


So 2016’s surface temperatures are likely to be down quite a bit from 2015 if La Niña conditions occur for much of this year. Current forecasts is that this may begin this summer, which would spread the La Niña cooling between 2016 and 2017.


Now on to Samenow. He’s a terrific weather forecaster, and he runs the Post’s very popular Capital Weather Gang web site. He used to work for the EPA, where he was an author of the “Technical Support Document” for their infamous finding of “endangerment” from carbon dioxide, which is the only legal excuse President Obama has for his onslaught of expensive and climatically inconsequential restrictions of fossil fuel‐​based energy. I’m sure he’s aware of a simple real‐​world test of the “weather more extreme” meme. University of Colorado’s Roger Pielke, Jr. tweeted it out on January 20 (Figure 2), with the text “Unreported. Unspeakable. Uncomfortable. Unacceptable. But there it is.” 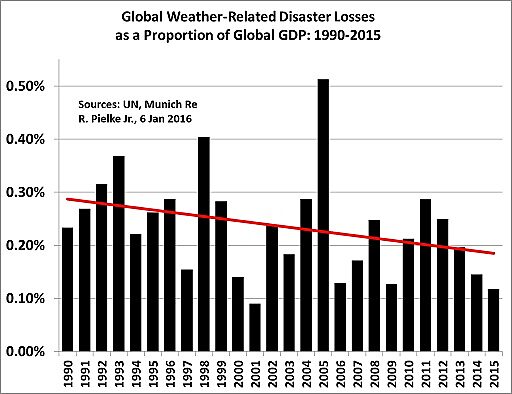 
It’s been a busy day on the incomplete‐​reporting‐​of‐​climate front, even as some computer models are painting an all‐​time record snowfall for Washington DC tomorrow. Jason Samenow and the Capital Weather Gang aren’t forecasting nearly that amount because they believe the model predictions are too extreme. The same logic ought to apply to the obviously “too‐​extreme” climate models as well, shouldn’t it?