Curb Your Enthusiasm: Americans Should Not Expect Much from Obama’s Visit to the UN 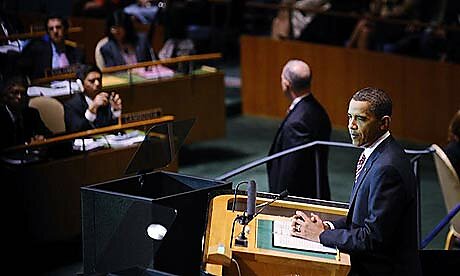 President Obama’s address to the United Nations General Assembly this morning, and his chairing of the UN Security Council on Thursday, is a grand attempt to tell the world–after eight years of George W. Bush–that the United States will no longer go it alone.


The president has a very difficult task, however, if he expects to invest the United Nations with renewed credibility. The UN is a weak and fractured institution, whose limited power and authority has been steadily undermined by a progression of U.S. presidents, both Democrats and Republicans. We should not forget that President Bill Clinton explicitly circumvented the UN Security Council when he chose to intervene militarily in Kosovo in 1999. Clinton’s evasion of the UNSC established a precedent for future military intervention that the Bush administration happily capitalized upon to send troops into Iraq in 2003.


Susan Rice, our current UN ambassador, endorsed this approach in 2006 when she called for U.S. military action against Sudan. Prior UN approval of such a mission was unlikely, but ultimately unnecessary, Rice argued at the time, because of the precedent set by President Clinton in Kosovo.


For American policymakers who have demonstrated such disdain for the UN in the past to now profess great respect for the institution should not surprise us. The UN is only as relevant as the member states wish it to be. In areas of common concern, the desire to cooperate and compromise may temporarily trump concerns over protecting state sovereignty and preserving freedom of action to deal with urgent security threats. In most cases, however, we can expect the member states, with the United States in the lead, to pursue policies that they believe (not always correctly, as we learned in Iraq) will advance their security. And if the UN weakly sanctions such actions after the fact, or refuses to do so, that will only reveal its irrelevance.