History hasn’t been kind to Alexander Hamilton’s hypothesis, in Federalist 68, that “there will be a constant probability of seeing the [office of the presidency] filled by characters pre‐​eminent for ability and virtue.” Still, he was spot‐​on in No. 65, when he predicted that impeachment debates would stoke partisan rancor, driving “pre‐​existing factions [to] enlist all their animosities, partialities, influence, and interest on one side or on the other.”

Impeachment talk started unusually early in the Trump administration, and seems likely to get louder as we go. So far it’s been an even richer source of hyperbole and hypocrisy than the judicial filibuster.

“Congress must begin impeachment proceedings immediately,” insists MoveOn​.org, the activist group born in a 1998 campaign urging Congress to “Move On to pressing issues facing the country,” instead of impeaching Bill Clinton. They’ve lately developed an interest in presidential obstruction of justice, so today MoveOn would rather linger. Meanwhile, the American Spectator—the magazine that put itself on the map (and the Paula Jones lawsuit in play) with investigative reporting on Clinton’s sex scandals—already has a case of “impeachment fatigue.” “The times are sour and ill‐​mannered enough without unnecessary strife over removal of a duly elected president of the United States,” William Murchison sniffs at the AmSpec site. 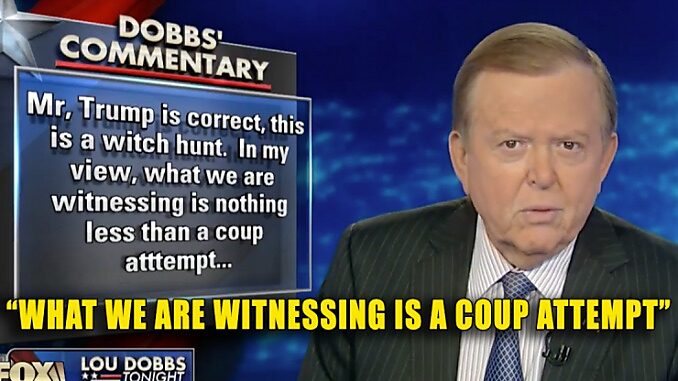 As I noted in a piece for U.S. News earlier this week, the emerging refrain on the Right is that anyone who dares mention the “I‐​word” has thrown in with a vast left‐​wing conspiracy plotting “a coup attempt against a lawfully elected government.” That’s from Dinesh D’Souza, but Gary Bauer, Tom Tancredo, Ben Stein, Lou Dobbs, and Pat Buchanan are all singing from the same hymnal. If Trump is eventually brought down via impeachment, Buchanan charges, “this city will have executed a nonviolent coup against a constitutionally elected president.”

In our last national debate over impeachment, the coup was on the other foot (sorry!). Congressional Democrats used the term liberally, railing against the GOP attempt to remove Bill Clinton for perjury and obstruction of justice. “A partisan coup d’etat,” cried Rep. Jerrold Nadler (D-NY); a “Republican coup d’etat,” echoed John Conyers (D-MI). Rep. Maxine Waters (D-CA) pronounced herself appalled by “the raw, unmasked, unbridled hatred and meanness that drives this impeachment coup d’etat, this unapologetic disregard for the voice of the people.’’

All three are, of course, still in Congress today, ready to weigh in Trump’s current predicament. Nadler has affirmed that “impeachment[’s] a possibility”; “Auntie Maxine” is leading the charge, and while it doesn’t appear that Conyers has used the “I‐​word” yet, it’s surely just a matter of time, given that he’s tried to impeach nearly every Republican president over his five‐​decade career, (while giving Democrats a pass for similar behavior).

Because of the twelfth and twenty‐​fifth amendments, the successor to the president will most likely be a member of his own party.… Because in the case of Clinton, Democrat Al Gore would have become the next president, charges of usurpation or coup d’etat are ungrounded.

In the as‐​yet unlikely event of Donald Trump’s impeachment and removal, he’d be replaced by his hand‐​picked, lawfully elected, and obsequiously loyal running mate, Mike Pence. Some “coup.”

Our last two serious efforts at presidential impeachment arguably presented greater democratic deficiencies than Trump’s case would. Nixon’s resignation elevated Gerald Ford, who’d never stood before a national electorate, having been installed via the 25th amendment after Vice President Spiro Agnew resigned on corruption charges. And when the House Republicans set the Clinton impeachment in motion in October 1998, they faced a president with a 65 percent approval rating and a public overwhelmingly opposed to their efforts. In fact, it was a lame‐​duck Republican Congress that impeached Bill Clinton, a month and a half after the GOP lost five seats in the House.

I don’t recall folks like Gary Bauer genuflecting to the “will of the people” when they were trying to oust Clinton. Back then, doing the unpopular thing was an example of “grace under pressure and political courage,” per Pat Buchanan. Today, it’s a corrupt elite’s desperate attempt to overturn the results of the last election.

True, the impeachment remedy is in tension with pure democracy: “countermajoritarian,” like independent judicial review. It’s perfectly valid to argue that impeachment shouldn’t be done cavalierly, and that contemplating it in the first months of a new administration is premature. But if you only cry “coup” when your party’s president is in the dock, maybe sacred democratic principles aren’t what you’re actually worried about.