A new Reuters/Ipsos poll examines how Donald Trump impacts Democrats’ and Republicans’ conventional public policy opinions. The survey asked Americans to evaluate a series of questions related to statements Donald Trump has made on public policy. However, the poll only told half of the respondents that Trump had made the statement, the other half were simply asked if they agreed or disagreed with the position. Sure enough, the “Trump effect” turned Democrats’ away from single-payer health care and got Republicans somewhat less convinced of their opposition. 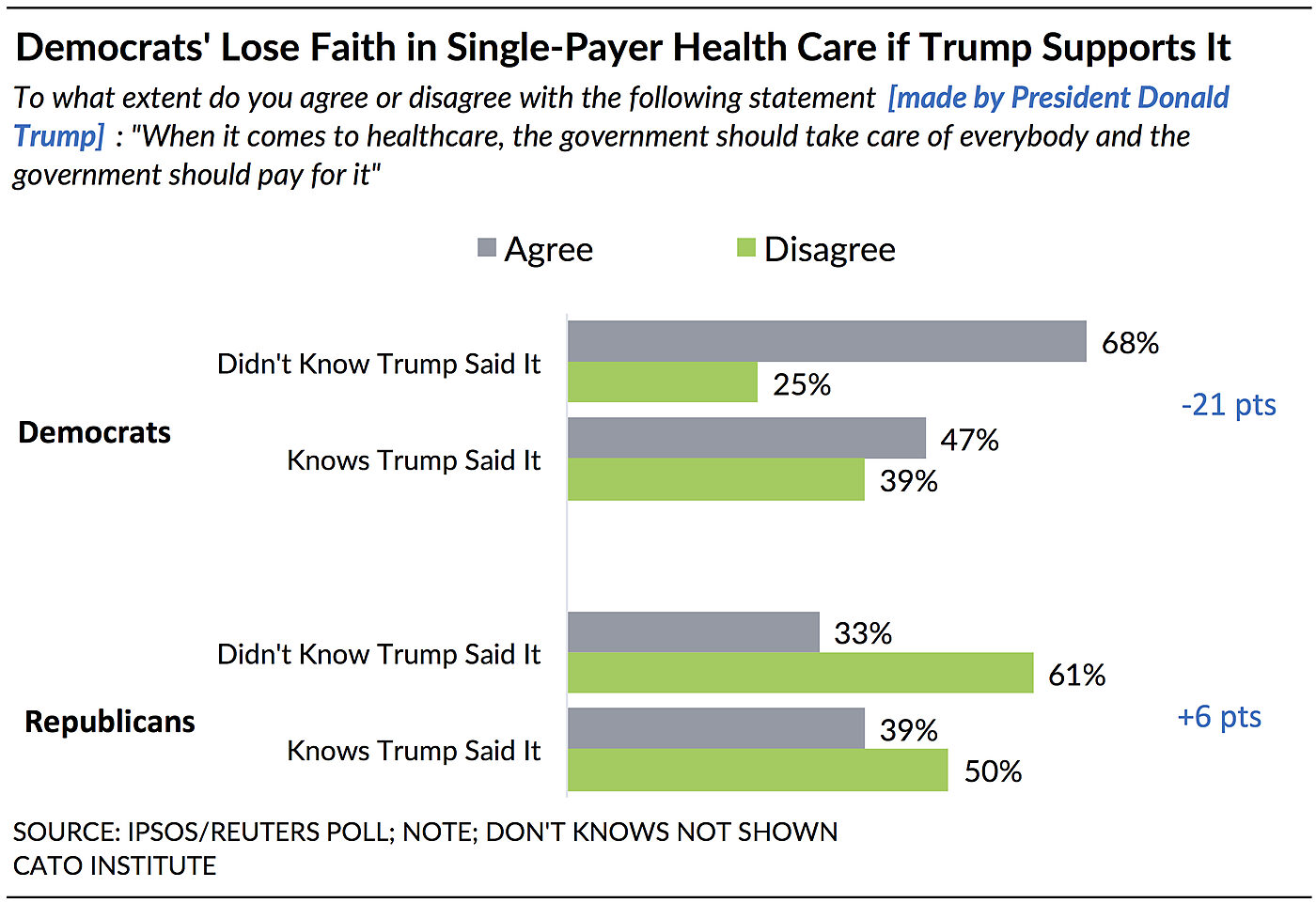 At first, 68% of Democrats agreed that government should pay for everybody’s healthcare. However, this share drops 21 points to 47% among Democrats who were told Trump thought government should pay for everyone’s healthcare. Republicans' support increased, but by 6 points, from 33% to 39%, among those who were told Trump made the statement. Initially, 61% of Republicans disagreed with the idea of single-payer, but opposition declined to 50% among those who learned Trump favored it. 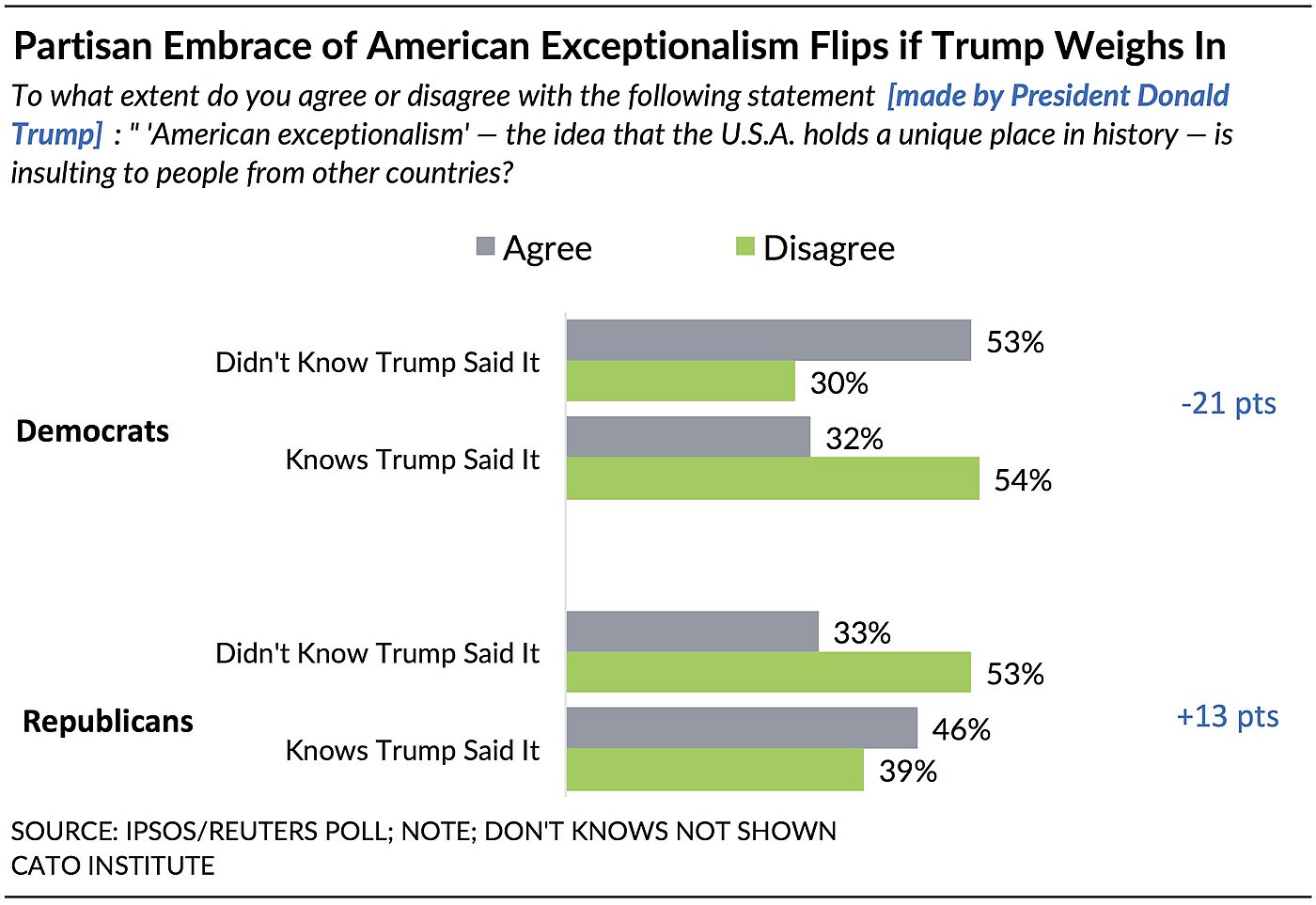 The survey found several more instances of the “Trump effect” among partisans. Notably, majorities of both Democrats (69%) and Republicans (56%) agreed that “government officials should be forbidden from financially benefitting from their position.” However, when Trump was explicitly identified, only 23% of Republicans believed that “Donald Trump should be forbidden from financially benefiting from his position”—a shift of 33 points.

It’s important to keep in mind that Democratic and Republican partisans may have differently interpreted the statements mentioning Trump. For instance, perhaps Republicans assume Trump benefiting financially from his position means his brand may benefit, while Democrats may think it means that he would use his power to offer special preferences to his businesses. Similarly, Trump may not have dissuaded Democrats from supporting a single-payer health care system. Instead, Democrats may wish government to manage the health care system unless Trump is at the helm of the federal government. Thus, the “Trump effect” might be due to different interpretations of the statement’s meaning.

In either case, Trump remains a polarizing force in American politics. He may sour Democrats on ideas they have historically favored and warm Republicans to ideas they’ve long opposed. As Howard House, a Democrat from Jacksonville, Florida, put it: “I’m basically in disagreement with everything [Trump] says. I’ve almost closed my mind to the guy.” Conversely, Susie Steward from Fort Worth Texas explained, “[Trump] is a very intelligent man, He’s proved himself to be one hell of a manager. A builder. I think he has the business sense to do what’s best for the country.”

This suggests that voters like Howard and Susie tend not to evaluate policy ideas based the policy's merits, but rather on the association they make between the policy and Donald Trump. Policies like health care and tax reform that become associated with Trump may become forever tainted in the minds of some Democrats. Conversely, some Republicans may come to accept policies out of line with GOP orthodoxy dependent on their level of confidence in Donald Trump.