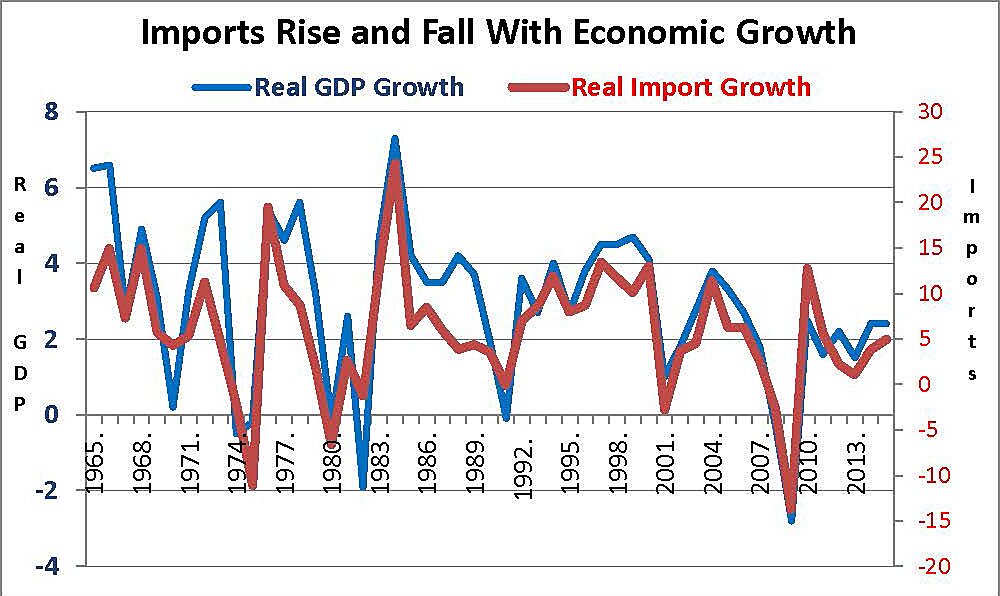 Nearly all surviving Democrat and Republican presidential candidates (except John Kasich) have essentially endorsed the shared campaign theme of Donald Trump and Bernie Sanders that the U.S. economy is weak because we import too many goods from foreign countries.  If only we could raise the cost of imports with tariffs, according to the Trump-Sanders theory, then the U.S. economy would supposedly have more jobs and higher real wages.

Paying more for anything (such as Fords or iPhones) is no way to get rich.  Yet that concept somehow eludes many non-economists.  Theory aside, the idea that fewer imports are good for the economy is the exact opposite of what we have experienced.  The fact is that U.S. imports always fall when the economy slips into recession and imports rise briskly whenever the economy does.

As the graph shows, the annual percentage growth of real GDP in the United States is very closely tied to the annual growth of real imports.  Rapidly expanding U.S. businesses need more imported parts and materials and increasingly prosperous Americans can also afford more imported goods.  In recessions, we neither need nor can afford as many imports.  This is why the U.S. balance of trade on goods and services was 3.6% of GDP in 2000 when the economy grew by 4.1% but shrunk to 2.7% of GDP in 2009 when the economy shrunk by 2.8%.  U.S. GDP grew by 2.1% a year 2010-15 (lifting imports), while foreign economies did much worse (hurting exports), so the trade deficit has been 2.9-3% of GDP lately - including a surplus of $220 billion in services.

The fact that U.S. trade deficits always expand when the U.S. economy grows faster than others certainly does not mean slower economies  are “winning” and the U.S. is a loser.  As our own experience shows, the fact that imports slow or contract when the economy does hardly makes stagnation or recession more desirable than 3-4% economic growth.  Europe and Japan would surely prefer decent economic growth to the weak imports that invariably accompany such weak economies.

Japan has run big trade surpluses for decades, yet Japan’s industrial production fell 2.7% from early 2010 to late 2015, while U.S. industrial production rose 13%.  Manufacturing jobs in Japan fell from 14.4 million in 1997 to 10.4 million in 2014.  Most Hondas and a very big share of other Japanese-branded cars are now made in the USA, where auto exports topped 2.1 million in 2014, including Japanese and German vehicles exported from this country.

Campaign rhetoric about the U.S. “not making anything anymore,” or about the U.S. not “winning” some make-believe trade war, is wrong and dangerous. The U.S. is second only to China in manufacutring, and maybe not for long.  The 2016 Deloitte global manufacturing competitveness index concludes that “China is currently the most competitive manufacturing nation [with the U.S. second and Mexico eighth], but the US is expected to take over the top spot in five years."